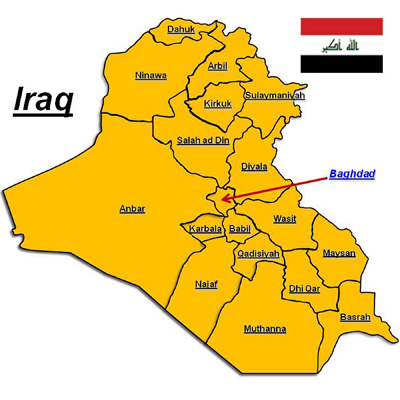 Image Credit: DoD
.
* The New York Times brings us the following report this early Monday morning and it starts off like this... Violence erupted across on Monday, as insurgents used suicide bombers, car bombs and gunmen to attack civilians and Iraqi security forces, killing at least [86] and wounding nearly [300]... The attacks on Monday appeared to be the most significant since July 5, when nearly three dozen people were killed in the city of , north of the Iraqi capital...
Read the rest of this troubling report at link below...
Wave of Attacks in Iraq Leaves at Least [86] Dead
.
* Fox News has this report posted-up on their website this morning and it starts off like this... Bomb blasts ripped through more than a dozen Iraqi cities Monday, killing [86] security forces and civilians in the worst attack this year, one that highlighted Al Qaeda's resolve and ability to wreak havoc... The bloodbath comes less than two weeks after Iraqi officials said they would be open to a small number of forces staying in the country past a Dec. 31 withdrawal deadline... The blasts were coordinated to go off Monday morning and included parked car bombs, roadside bombs, a suicide bomber driving a vehicle that rammed into a police station and even bombs attached to lightpoles...
Read this report in full at link below...
[86 plus] Killed as Wave of Violence Rolls across Iraq
.
* The Post has this take on the news out of ... More than [80] people were killed and dozens more were wounded Monday in a string of violent attacks around , one of the deadliest days in the country so far this year, police and government officials said... In the worst incident, two bombs exploded in a busy market in the city center of Kut, killing at least 37 and injuring more than 50...
Read the full report at link below...
More than [80] killed in attacks across Iraq
.
Here’s more from The Post:
- 310+ comments: Weigh in with your thoughts
Photos- Violent attacks sweep across Iraq
Video- Multiple blasts kill dozens in Iraq
Map: Synchronized explosions hit multiple cities
..
*****************************
- Making Progress - 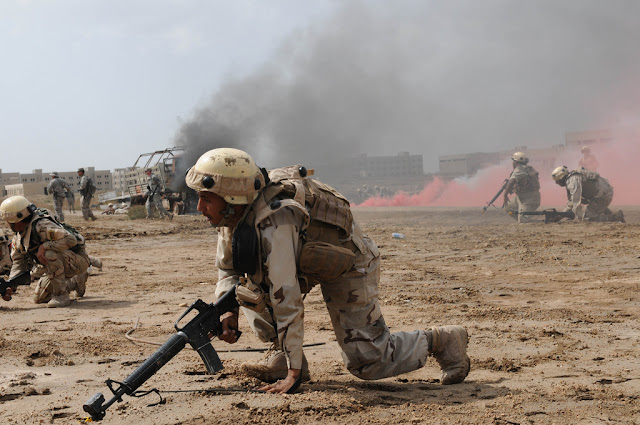 NUMANIYAH, Iraq – An Iraqi Army Soldier reacts to a battlefield scenario while Soldiers of the 3rd Armored Cavalry Regiment monitor progress during a collective training event at An Numaniyah Military Training Base in Numaniyah, Iraq, March 23rd. The training, named “Eagles Rising,” was developed and executed by 3rd Armored Cavalry Regiment and a team of Iraqi Army cadre and was intended to train members of the 8th Iraqi Army Division in external defense tactics.
US Army photo by Staff Spc. Adam Hefner
.......................
Advise and Assist Brigade reflects on
Operation New Dawn deployment
Monday, August 15, 2011
.
BABIL, Iraq - August 31st marks a year since U.S. Troops began serving under Operation New Dawn. This month the 3rd Armored Cavalry Regiment, the first Advise and Assist Brigade to deploy to under the new operational moniker, concludes its yearlong deployment.
.
“We began this deployment with a clear mission: to advise, train and assist the Iraqi Security Forces and enable the Provincial Reconstruction Teams in civic assistance to the population,” said Col. Reginald Allen, 3rd ACR commander, originally from Brooklyn, N.Y. “More than that, though, we were here to begin closing out the U.S. military mission in Iraq with dignity, respect and courage in honor of those brave Soldiers who lost their lives and were wounded since 2003.”
.
In keeping with the primary facet of the unit’s mission, 3rd ACR developed close ties with the Iraqi Security Forces in their area of responsibility. The unit trained more than 14,000 members of the Iraqi Security Forces in individual skills, ranging from Humvee maintenance to crime scene investigation techniques, and collective unit tasks.
.
In a large-scale, four-month training event with the 8th Iraqi Army, a team of 3rd ACR and Iraqi Army cadre trained 20 companies in external defense scenarios. The training involved the first use of the Multiple Integrated Laser Engagement System in , allowing for more realistic battlefield conditions.
.
“I think 3rd ACR’s legacy is to be that of a long-term enduring partner with multiple Iraqi units,” said Command Sgt. Maj. Jonathan Hunt, senior noncommissioned officer of the regiment and a native of  “We’ve served four years over here in four different locations, and we’ve had the opportunity to assist the Iraqi Security Forces in numerous training events. So, I think the legacy that we’re leaving is one of building stability and capability in the ISF.”
.
3rd ACR operated in the five of southern , immediately south of – an area where several different insurgent militias have been known to operate.
.
“U.S. Troops here are operating in a complex environment,” said Allen.  “We are a force conducting stability operations in an indigenous counterinsurgency environment under a security agreement. Those type of conditions present many challenges.”
.
During the deployment, the unit witnessed positive steps in the development of the rule of law in their area of responsibility. In cooperation with Iraqi Security Forces, the regiment detained 58 suspected terrorists and followed the chain of evidence that placed them into the Iraqi court system. In an unprecedented trial in southern in May, four criminals were convicted on terrorism charges against Forces and sentenced to 15 years each in prison, representing the first documented conviction at the provincial level for crimes against Americans. The driving force behind this was the regiment’s prosecution task force, composed of lawyers, intelligence and law enforcement professionals and other unit leaders.
.
“The prosecution task force was a key mission for 3rd ACR because it not only facilitated the rule of law, which increased Iraqi judicial efficiency and transparency, but it also positively influenced our force protection,” said Maj. Jay Stephenson of Mackinac Island, Mich., and the  senior legal advisor of the regiment. “Furthermore, as other nations view the Iraqis prosecuting suspected terrorists, it will encourage outside investing, leading to a more financially stable and secure .”
.
Soldiers from 3rd ACR partnered with the provincial reconstruction teams to build schools, provide grants to small businesses and support the local economy in the unit’s five provinces. Notable among these projects were facility improvements to the museum at the site of the historic Ruins of and the construction of 212 greenhouses to support local farmers in .
.
In keeping with the planned withdrawal of military by Dec. 31, 3rd ACR supported a responsible drawdown of forces by closing four bases ahead of schedule and tapering its footprint in southern from seven bases at the beginning of the deployment to three.
.
“We were able to return each of four bases better than we got them,” said Maj. Michael Rutherford, supply and logistics officer of the regiment and a native of , Calif. “We’ve returned them all in a state of environmental compliance, even by American EPA standards. All workspaces are fully functional and in compliance with OSHA standards, and at each location, a fiber optic network was left intact and exploitable.”
.
With the deployment behind them, he unit will transform to a Stryker Cavalry Regiment in November, making this the last deployment for the 3rd Armored Cavalry Regiment in its current configuration as an armored force of M1 Abrams tanks and M3 Bradley Fighting Vehicles.
.
“Our work here served as a delaying action that provided time and space for the Government to negotiate a long-term strategic partnership between our two countries,” said Allen. “The regiment won its fight and made a difference in , thanks to the sacrifices of brave Soldiers and faithful Families.”
.
Written by Maj. Jason Billington, 3rd Armored Cavalry Regiment - USF-Iraq.com
.
********************************
.
Dozens killed in 's bloodiest day this year
ATTENTION:
* VIEWERS MAY FIND SOME IMAGES DISTRESSING *
.
About Video: Raw Aftermath Video Footage of attacks...
Duration: 01:27
NOTE: If “ YOUTUBE” pops up, go ahead and click on link in video. For whatever reason, AFP has a block on this video not letting Bloggers show it on their websites... Go Figure...   Lol
Anyway... Sorry about that...
.
This video posted on YouTube by AFP
.
............................................
I’m going to do more digging into these attacks of late to see just how much involvement the Iranians have had in all this mess. Betting it will be a lot!!!
AubreyJ.........


.
******************************
.
Post update:
Tuesday, August 16, 2011
.
The latest series of bombings that hit Monday bear all the markings of Al Qaeda... but in the long term, Iran-backed militias are a greater problem, says a top military official...
* CSMonitor.com has the report at link below...
Biggest threat to Iraq? Iran-backed militias, not Al Qaeda, US official says
- Also from CSMonitor.com is this report...
US military officials in Iraq warn of growing Iranian threat
.
* Google.com has this AP report that goes in part like this...
Maj. Gen. Jeffrey S. Buchanan, the top U.S. military spokesman in Iraq, said the Shiite militias — together they have several thousand insurgents — are working to keep the government weak and isolated. Decisions on the number of types of attacks launched by the three main militia groups, he said, are made inside , including through their ties with the powerful Quds force... The escalating threat underscores the dangers as the prepares to pull its troops out by the end of the year. Iraqi officials are discussing whether they want to have some American forces stay in the country past that deadline...
Read the rest at link below...
US general: Iran-backed groups biggest Iraq threat
.........................
More to come I’m sure...
AJ
...
Posted by AubreyJ......... at 8/15/2011 05:03:00 PM