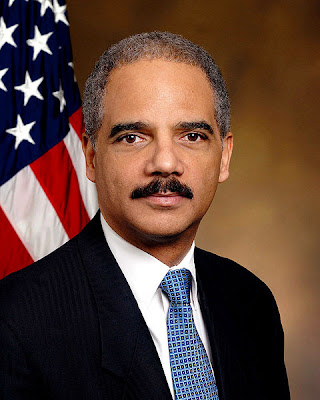 United States Department of Justice Official Portrait
.
President Obama Asserts Executive Privilege
Backing His Embattled Attorney General Erick Holder Over Botched Arms Smuggling Operation Fast and Furious
Wednesday, June 20, 2012
.
How fast the news can change and in just a few hours too!
.
I… like many others have been keeping up with all this news over the botched arms smuggling operation “Fast and Furious”. But to the best of my knowledge, I haven’t posted anything on all this mess and it has been going on for over a year now. That is until early this Wednesday morning when EVERYTHING CHANGED and sent the News Media into all kinds of a reporting frenzy.
.
What set everyone off? President Obama did when he granted his Attorney General Eric Holder permission to assert executive privilege to withhold documents from the Republican-Led Congressional Committee. What a mess!!!
…
Here’s what started the chain of events this morning…
(Deputy Attorney General James Cole sent the following letter to Issa)

After you rejected the Department's recent offers of additional accommodations, you stated that the Committee intends to proceed with its scheduled meeting to consider a resolution citing the Attorney General for contempt for failing to comply with the Committee's subpoena of October 11, 2011. I write now to inform you that the President has asserted executive privilege over the relevant post-February 4, 2011, documents.

We regret that we have arrived at this point, after the many steps we have taken to address the Committee's concerns and to accommodate the Committee's legitimate oversight interests regarding Operation Fast and Furious. Although we are deeply disappointed that the Committee appears intent on proceeding with a contempt vote, the Department remains willing to work with the Committee to reach a mutually satisfactory resolution of the outstanding issues…
Read Letter in full and more HERE
……………………………
.
* FOX News just posted this up-to-date report and it starts off like this… Rep. Darrell Issa pressed ahead with a committee vote Wednesday to hold Attorney General Eric Holder in contempt of Congress, despite an eleventh-hour move by President Obama to assert executive privilege over the Fast and Furious documents at the heart of the dispute… The announcement touched off a caustic debate on the House Oversight and Government Reform Committee that lasted well into the afternoon, as Democrats accused Issa of prosecuting a "political witch hunt" and Republicans stepped up their criticism of Holder's "stonewalling" over the Fast and Furious probe. Even for Washington, the tone at the hearing was decidedly bitter and accusatory… The House Oversight and Government Reform Committee was first informed of the president's decision to assert executive privilege in a letter Wednesday morning, shortly before the contempt vote was scheduled….
Read the full report at link below…
Issapushes ahead with Holder contempt vote despite Obama intervention

* New York Post Opinion Columnist Michael A. Walsh writes in part: …Issa surely feels like Charlie Brown charging the football, with Holder as Lucy. For over a year, he’s been trying to pin down the slippery AG, issuing one “last chance” after another, dragging Holder in front of the House Committee on Oversight and Government Reform (on top of Senate appearances) and firing off angry letter after angry letter… Each time, Holder has scampered off, meeting Issa’s legitimate demands with contempt -- for the congressman, the Congress itself and the rule of law.
He tried it again yesterday after his offer was rebuffed, calling Issa’s demands “political gamesmanship” and cracking, “The ball’s in their court.” Um… no, Mr. Attorney General. The ball’s in your court…
Read Walsh’s take in full at link below…
Isthis the end of Eric Holder's games?
.
………………
More to come and that’s a certain!
AubreyJ………
ROMNEY2012
.
Posted by AubreyJ......... at 6/20/2012 04:13:00 PM