(Note: This post on top today - Scroll for newer post below)
Statement on Federal Disaster Assistance for California
Tuesday, October 23, 2007
The President today declared an emergency exists in the State of California and ordered Federal aid to supplement State and local response efforts in the area struck by wildfires beginning on October 21, 2007, and continuing.

The President's action authorizes the Department of Homeland Security, Federal Emergency Management Agency (FEMA), to coordinate all disaster relief efforts which have the purpose of alleviating the hardship and suffering caused by the emergency on the local population, and to provide appropriate assistance for required emergency measures, authorized under Title V of the Stafford Act, to save lives, protect property and public health and safety, and lessen or avert the threat of a catastrophe in the counties of Los Angeles, Orange, Riverside, San Bernardino, San Diego, Santa Barbara, and Ventura.

Specifically, FEMA is authorized to identify, mobilize, and provide at its discretion, equipment and resources necessary to alleviate the impacts of the emergency. Emergency protective measures, including direct Federal assistance, will be provided at 75 percent Federal funding. 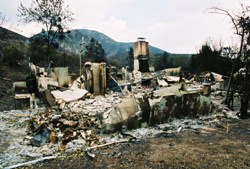 Tuesday, October 23, 2007
Federal Emergency Management Agency is working side-by-side with state officials and other federal partners engaged in the response to the multiple wildfires burning across southern California. The President today issued an emergency disaster declaration for California and ordered greater federal aid to supplement state and local response activities in the affected areas.