This post on top for most of day - Scroll for newer post
Saturday, November 03, 2007
. ..
Watch 4th SPACEWALK Live
this Saturday morning
on NASA TELEVISION 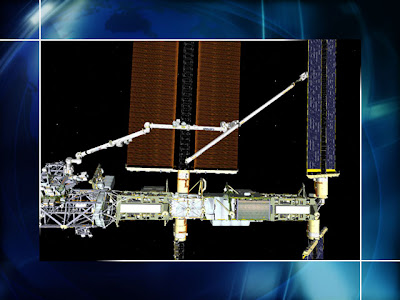 Animation of Array Repair
Image Credit: NASA
*********
You got to click out this EVA 4 Animation Video
(It shows in part what is going to happen in 4th spacewalk -- Dangerous but nevertheless... COOL STUFF!)
Click HERE to view - Video by NASA

Parazynski and Mission Specialist Doug Wheelock will conduct the excursion, which is slated to kick off at 6:28 a.m. EDT Saturday. Parazynski will repair a torn solar array while suspended from the boom attached to the space station’s robotic arm, and Wheelock will assist from the station’s truss. Mission Specialist Stephanie Wilson and Expedition 16 Flight Engineer Dan Tani will be operating the station’s robotic arm from the robotic work station inside the Destiny laboratory. Mission Specialist Paolo Nespoli will be the spacewalk coordinator.
Info from NASA Website.
**********
* 4th Spacewalk officially began at 6:03 am EDT
and wrap up at 1:22 pm EDT

Today’s mission lasted for a total of 7-hour, 19-minutes
.***********************
Update on today’s mission:
11:30am EDT
Mission Specialists Scott Parazynski and Doug Wheelock have successfully repaired the torn solar array this morning. The crew inside then fully deployed the array which was also a success.
Great work Ladies and Gentlemen!!!
Not let’s get them back inside safe and sound...

Note: After Saturday's Spacewalk...
Discovery STS-120 has NO MORE Spacewalks scheduled
* Today was the last spacewalk for STS-120 DISCOVERY - The shuttle’s crew will now start preparing to leave the station. They will close the hatch between the shuttle and the station at 1:43 p.m. EST on Sunday, after interviews with European media, off-duty time, and farewells. Discovery is scheduled to undock from the Space Station Monday morning. *
**************
* Read the latest updates on Flight/Spacewalks HERE