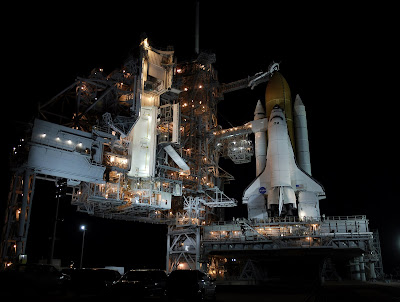 About photo: Taken 12-05-07 - Space Shuttle Atlantis stands bathed in lights
atop a mobile launch platform
Photo credit: NASA - Kim Shiflett)
(Note: This post on top today - Scroll for newer post below)
.
Today’s Launch Was Try #ONE
And I’m sorry to say that
today’s LAUNCH WAS SCRUBBED
this morning at 9:56am EST
Next launch attempt is tomorrow, (Friday)
at 4:09 pm EST

More info below...
.
December 6th, 10 a.m. EST: During tanking, two of four LH2 Engine Cutoff (ECO) sensors failed to respond appropriately, which is a Launch Commit Violation. The requirement to proceed calls for 3 of 4. The launch was scrubbed at 9:56 a.m. EST on the recommendation of Launch Director Doug Lyons.
.
Mission Management Team Chairman LeRoy Cain concurred following a short briefing on the issue. The ice inspection team will proceed with an abbreviated vehicle inspection prior to offloading the LO2 and LH2 and recycle for a launch attempt tomorrow, at 4:09 p.m.
.
A press briefing is tentative scheduled for 3 p.m. An update is forthcoming on NASA TV.
Info from NASA.gov website