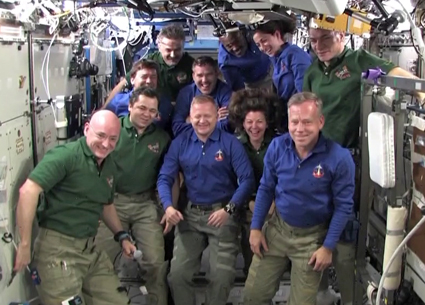 and the International Space Station. The hatches between the two spacecraft were opened at 4:16 p.m. on February 26 and remained open for joint crew operations for a total of 7 days, 23 hours, and 55 minutes.
.
Prior to hatch closure, the shuttle and station crews exchanged farewells. Discovery Commander Steve Lindsey thanked station Commander Scott Kelly for the hospitality. Kelly responded, “It was a very successful time onboard. We enjoyed having you as guests, we’re going to miss you, and we’re going to miss space shuttle Discovery. Discovery been a great ship and has really supported ISS more than any other shuttle and we wish her fair winds and following seas. Thank you.”
.
Discovery’s six crew members will awaken to a special song with a surprise twist at 3:23am Monday, “Theme from Star Trek” by Alexander Courage. It was the runner-up in the wakeup song contest - https://songcontest.nasa.gov/.
.
Discovery will undock from the station on Monday, March 7th at 7:03am EST and begin the ISS fly around at 7:33am EST.
.
If all goes to plan...
Deorbit burn will occur Wednesday, March 9th at 10:55am EST.
Landing at Kennedy Space Center will follow at 11:58am EST.
.
........................................
.
Safe Landing!
AubreyJ.........
.
Posted by AubreyJ......... at 3/06/2011 06:29:00 PM