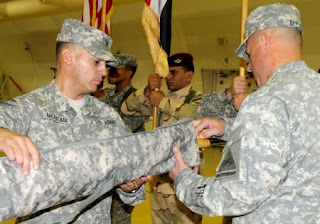 Col. Scott McKean (left) and Command Sgt. Maj. Thomas Eppler, command team, 4th Advise and Assist Brigade, 1st Armored Division, uncase the brigade colors during a transfer of authority ceremony Sept. 4, 2011 at Contingency Operating Site Marez, Iraq.
Read the story behind the photo HERE
By: Spc. Brandon A. Bednarek
4th Advise and Assist Brigade, Public Affairs
1st Armored Division, U.S. Division-North
..…
* Here's a good read I ran across today at The Christian Science Monitor on the latest out of Iraq. They have a nice round of photos in their post too. It starts off like this... The Obama Administration is considering dropping the president’s commitment to withdrawing all US troops from Iraq by the end of the year in favor of keeping several thousand military trainers there… The plan is already running into roadblocks in Iraq and in the US. In Washington, some political leaders are calling on President Obama to leave no troops behind, while others say the president should heed his military commanders on the ground and keep far more troops than the 3,000 to 4,000 he is considering… On Tuesday, three of the Senate’s big guns on military affairs - John McCain (R) of Arizona, Lindsey Graham (R) of South Carolina, and Joe Lieberman (I) of Connecticut - issued a statement criticizing the 3,000 number as “dramatically lower than what our military leaders have consistently told us … they require.”…
Read the rest at link below…
Iraq withdrawal: How many US troops will remain?
.
………………..
AubreyJ………
.
Posted by AubreyJ......... at 9/07/2011 03:42:00 PM