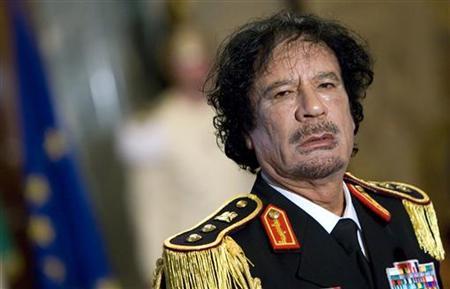 Conflicting Reports Say Fugitive Leader
Moammar Gadhafi CAPTURED/DEAD
Thursday, October 20, 2011
.
* FOX NEWS was first reporting EARLY this Thursday morning…
Conflicting Reports Say Libyan Dictator Muammar Qaddafi Has Been Captured or Killed
…..
...
* REUTERS REPORTS…
Former Libyan leader Muammar Gaddafi died of wounds suffered on Thursday as fighters battling to complete an eight-month-old uprising against his rule overran his hometown Sirte, Libya's interim rulers said… His killing, which came swiftly after his capture near Sirte, is the most dramatic single development in the Arab Spring revolts that have unseated rulers in Egypt and Tunisia and threatened the grip on power of the leaders of Syria and Yemen… "He (Gaddafi) was also hit in his head," National Transitional Council official Abdel Majid Mlegta told Reuters… "There was a lot of firing against his group and he died."… Mlegta told Reuters earlier that Gaddafi, who was in his late 60s, was captured and wounded in both legs at dawn on Thursday as he tried to flee in a convoy which NATO warplanes attacked. He said he had been taken away by an ambulance… There was no independent confirmation of his remarks…
Read the full report at link below…
Gaddafi killed as Libya's revolt claims hometown
...
.

Above Footage obtained by Al Jazeera shows the body of the former Libyan leader Muammar Gaddafi following his death in Sirte. Note: Very Graphic video above


******************************
.
Latest Updates:
2:10pm CDT
.
Here’s how I believe it all went down today on the Killing of Moammar Gadhafi.
.
First of all… USA… USA… USA…
.
YES… A United States Armed Predator Drone alone with a French Jet… attacked what has been reported to have been an 80 car plus convoy in which Gadhafi was riding in.
.
It appears Gadhafi survived this attack and bailed to what looked to me to have been some coverts by or under the main road. At least one of Gadhafi’s loyal soldiers was with him, trying to protect his X-Leader from a mob of Rebels and got himself shot all to heck and killed. The rebels then turned to dragging Gadhafi out of his hole, (Gadhafi shouting, DON’T SHOOT!!!)
.
In the video you hopefully clicked out above… you might have noticed that many of the Rebels had no shoes on. Well… that is because some had taken their shoes off and were beating the crap out of Gadhafi with them. Then sometime during all of this mob beating… one of the rebels took it on himself to shoot Gadhafi in the head.
.
I figured he must have missed his target the first shot, hitting Gadhafi in his shoulder… but target on with the second shot, hitting Gadhafi dead square to the head, killing him instantly.
.
And that in a nutshell is the way the Killing of Moammar Gadhafi went down today.


.
……….....................……………
.
POST UPDATE:
Friday, October 21, 2011
.
* Reuters brings us the following report late Friday evening and it starts off like this… NATO called an end to its air war in Libya and the clan of Muammar Gaddafi demanded a chance to bury the body that lay on display in a meat locker after a death as brutal and chaotic as his 42-year rule… In a statement on a Syria-based pro-Gaddafi television station, the ousted dictator's family asked for the bodies of Gaddafi, his son Mo'tassim, and others who were killed on Thursday by fighters who overran his hometown Sirte…
Read the rest at link below…
Gaddafi family demands body; NATO ends Libya war
30 Photos in above link, some are very graphic!
…
The Long Rule and Rapid Decline of Colonel Gaddafi
Lots of Photos in above link and as in the rest of the photos in this post… some are VERY Graphic!
…
………………
AubreyJ………
.
Posted by AubreyJ......... at 10/20/2011 08:27:00 AM