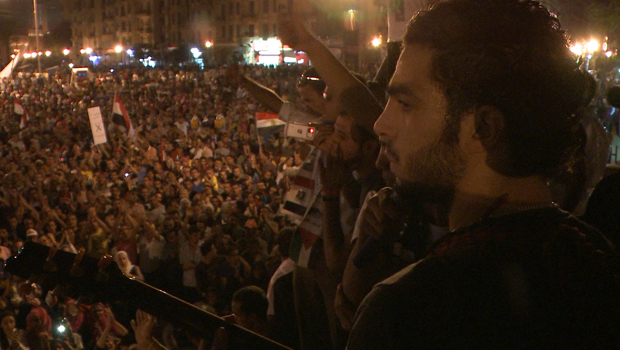 Image from news video pull,  I believe, by CBS News

* The Guardian brings us the following troubling news out of Egypt today and their report starts off like this… Egypt's military rulers have held emergency talks with Christian leaders after the worst violence since February's revolution left 26 people dead and 300 injured - and raised grave doubts about the country's democratic transition… The Coptic church called on followers to fast and pray for three days from Tuesday to mourn Christians killed in clashes with Muslims and security forces on Sunday night, now the subject of an investigation ordered by the ruling Supreme Council of the Armed Forces (Scaf), led by Field Marshal Mohammed Hussein Tantawi… Issam Sharaf, the interim prime minister, warned of a "despicable conspiracy" against Egypt and called for unity…
Read the full report at link below…
Cairo clashes: military rulers hold emergency talks with Christian leaders
.
* CBS News has this take on the latest news out of Egypt… Despite ousting the dictator whose regime repressed and tortured citizens for decades, Egyptians are now facing the same treatment from the country's military that they endured under President Hosni Mubarak. Bob Simon reports
Read much more, with video at link below…
Revolution: Egyptians return to Tahrir Square
.
****************************
.
Cairo on edge after deadly clashes
About this video: Cairo remains tense after clashes left at least 24 people dead and up to 200 injured in the worst violence in the Egyptian capital since the country's revolution in February… An overnight curfew was lifted on Monday but dozens of people have been arrested, according to state media reported, and a heavy security presence remained on the streets near Tahrir Square… Al Jazeera's Omar al Saleh reports
This video posted on YouTube by AlJazeeraEnglish