About Photo: Commander Mark Kelly and crew are set to launch at 4:02 p.m. CDT Saturday, delivering the main segment of Japan's Kibo module to the station
Image credit: NASA

As of 9:30am CDT... The weather is looking promising for launch today, according to Shuttle Weather Officer Kathy Winters. Isolated coastal showers may be in the area during the morning hours, but a sea breeze will develop in the afternoon, clearing the coast and causing any showers to move inland. There is an 80 percent chance of favorable weather at launch time.
This mission will carry the largest payload so far to the station and includes three spacewalks. It is the second of three missions that will launch components to complete the Japan Aerospace Exploration Agency's Kibo laboratory. The crew will install Kibo's large Japanese Pressurized Module and Kibo's robotic arm system. Discovery also will deliver new station crew member Greg Chamitoff and bring back Flight Engineer Garrett Reisman, who will end a three-month stay aboard the outpost.
Info from the NASA.gov website 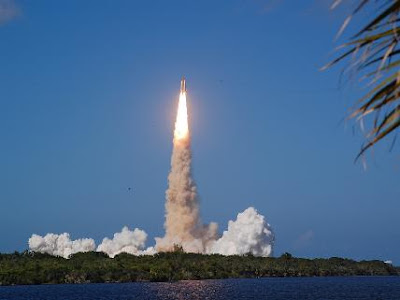