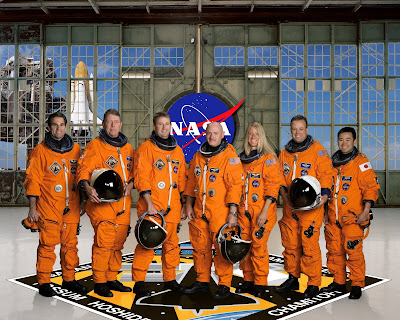 Clocks Begin Ticking Toward Saturday Launch
Wednesday, May 28, 2008
Countdown clocks at NASA's Kennedy Space Center in Florida began counting down from the T-43 hour mark at 3 p.m. EDT today. The launch team is tracking no issues as technicians continue preparing space shuttle Discovery for liftoff on May 31 at 5:02 p.m. EDT.

There is a possibility for isolated coastal showers on the morning of launch, but the weather forecast is good overall, with an 80% chance of favorable weather at liftoff time.

The seven-member STS-124 crew arrived at Kennedy at about 12:30 p.m. today, touching down at the Shuttle Landing Facility in T-38 jets. "Discovery's perched on the pad, Kibo is ready to go, the weather looks good, and we're about as ready as we could possibly be," said Mission Specialist Mike Fossum. "I think it's time to go fly."

Discovery's 14-day flight will carry the largest payload so far to the station and includes three spacewalks. It is the second of three missions that will launch components to complete the Japan Aerospace Exploration Agency's Kibo laboratory. The crew will install Kibo's large Japanese Pressurized Module and Kibo's robotic arm system. Discovery also will deliver new station crew member Greg Chamitoff and bring back Flight Engineer Garrett Reisman, who will end a three-month stay aboard the outpost.
News article from NASA.gov website
Posted by AubreyJ......... at 5/28/2008 03:55:00 PM