9 Killed In Gaza
As Israel Retaliates
After Long-Range Rocket Attacks
Thursday, January 03, 2008
.
Following report is from the IDF Website...
* IAF Strikes Targets in Gaza *
.
The IAF launched a strike roughly an hour ago, against a number of targets in the Gaza Strip. The IAF 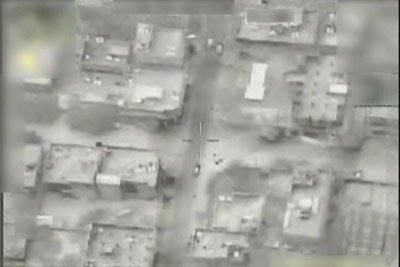 fighter jets reported direct hits on their targets; a weapons cache belonging to the Islamic Jihad based in Gaza City, a building belonging to Islamic Jihad operatives in the central Gaza Strip, and a Hamas owned building in the southern Gaza Strip. This strike took place after projectiles were launched at the Israeli city of Ashkelon this morning and after continuous projectile fire which has been taking place from the Strip into Israeli territory.

Additionally, two armed gunmen who had barricaded themselves inside a house adjacent to IDF forces operating in the southern Gaza strip this morning were killed by IDF fire. The gunmen fired at the forces using light weapons, and also fired anti-tank missiles. The tanks returned fire with shells directed at the source of fire, and the two gunmen were killed. Two other Palestinians who were in the house with the gunmen were also killed.
Archive Photo: IDF Spokesperson
*************
YNET.com has this report on today’s attacks...
Three civilians said to be among Palestinians killed in IDF strikes in Gaza after terror groups fired a long-range rocket towards Ashkelon. Army accuses militants of intentionally basing themselves in civilian areas...
Read report in full at the YNET.com website
...
>>> IsraelNationalNews.com reports it this way... The rocket war in and around Gaza is heating up. The Israel Air Force bombed Gaza three times on Thursday afternoon in retaliation for a Katyusha rocket that landed further north than any rocket ever fired from Gaza. Shortly afterwards, a Kassam rocket attack from Gaza injured a Sderot woman hanging laundry...
Read the rest at link below...
Israel Retaliates, Bombs Gaza Three Times
.
>>> DEBKAfile Reports...
Israeli Air Force bombs Hamas base in response to first 122mm Katyusha rocket attack on in northern Ashkelon - the farthest yet from Gaza
.
>>> JPOST.com... has report, video, photos and more at link below...
IDF kills nine in Gaza raids
.
>>> Middle-East-Online.com... Israeli troops, tanks, warplanes launch deadly assault on Palestinian militants in Hamas-ruled Gaza Strip...
Nine killed in new Israeli blitz on Gaza .
*****************
* Israeli Ground and Air Attacks in Gaza Strip *
Video rated as Mature
Raw video - (January 3, 2008) At least eight Palestinians, including four civilians, have been killed in Israeli ground and air attacks in the Gaza Strip. At least 33 people have been injured... Israeli troops, with helicopter support, launched attacks in a village in the vicinity of Khan Yunis. A number of houses, where the Israelis say militant Palestinians were sheltering, were blown up... Israeli aircraft staged four air raids targeting the Gaza Strip homes of leaders of Islamic Jihad. The raids came shortly after various Islamist groups had claimed responsibility for a rocket attack on a suburb of the Israeli city of Ashkelon.
Video and info posted on LiveLeak by playbynight
Posted by AubreyJ......... at 1/03/2008 06:02:00 PM