President Bush Discusses...
Outer Continental Shelf Exploration
From The White House Rose Garden
Monday, July 14, 2008
THE PRESIDENT: Good afternoon. Across the country, Americans are concerned about the high price of gasoline. Every one of our citizens who drives to work, or takes a family vacation, or runs a small business is feeling the squeeze of rising prices at the pump. 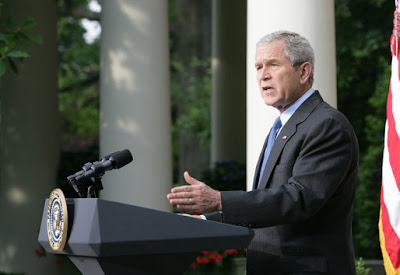 To reduce pressure on prices we must continue to implement good conservation policies, and we need to increase the supply of oil, especially here at home. For years, my administration has been calling on Congress to expand domestic oil production. Unfortunately, Democrats on Capitol Hill have rejected virtually every proposal -- and now Americans are paying at the pump. When members of Congress were home over the Fourth of July recess, they heard a clear message from their constituents: We need to take action now to expand domestic oil production.

One of the most important steps we can take to expand American oil production is to increase access to offshore exploration on the Outer Continental Shelf, or what's called the OCS. But Congress has restricted access to key parts of the OCS since the early 1980s. Experts believe that these restricted areas of the OCS could eventually produce nearly 10 years' worth of America's current annual oil production. And advances in technology have made it possible to conduct oil exploration in the OCS that is out of sight, protects coral reefs and habitats, and protects against oil spills.

Last month, I asked Congress to lift this legislative ban and allow the exploration and development of offshore oil resources. I committed to lift an executive prohibition on this exploration if Congress did so, tailoring my executive action to match what Congress passed. It's been almost a month since I urged Congress to act -- and they've done nothing. They've not moved any legislation. And as the Democratically-controlled Congress has sat idle, gas prices have continued to increase.

Now the ball is squarely in Congress' court. Democratic leaders can show that they have finally heard the frustrations of the American people by matching the action I've taken today, repealing the congressional ban, and passing legislation to facilitate responsible offshore exploration. This legislation must allow states to have a say in what happens off their shores, provides a way for the federal government and states to share new leasing revenues, and ensure the environment is protected.

This legislation should also take other essential steps to expand domestic production: Congress should clear the way for our nation to tap into the extraordinary potential of oil shale, which could provide Americans with domestic oil supplies that are equal to more than a century's worth of current oil imports. Congress should permit exploration in currently restricted areas of northern Alaska, which could produce roughly the equivalent of two decades of imported oil from Saudi Arabia. Congress should expand and enhance our domestic refining capacity, so that America will no longer have to import millions of barrels of fully-refined gasoline from abroad.

The time for action is now. This is a difficult period for millions of American families. Every extra dollar they have to spend because of high gas prices is one dollar less they can use to put food on the table or send a child to school. And they are rightly angered by Congress' failure to enact common-sense solutions. Today, I've taken every step within my power to allow offshore exploration of the OCS. All that remains is for the Democratic leaders in Congress to allow a vote. The American people are watching the numbers climb higher and higher at the pump -- and they're waiting to see what the Congress will do.

Thank you.
Watch the Video HERE

Now I ask all of you out there to PLEASE call your Congressman or Senator at 202-224-3121 and urge/demand them to now do their part and lift the Federal Ban on Offshore Drilling.

You can also help by signing the Petition at the
American Solutions website.
It reads as follows...
"We, therefore, the undersigned citizens of the United States, petition the U.S. Congress to act immediately to lower gasoline prices by authorizing the exploration of proven energy reserves to reduce our dependence on foreign energy sources from unstable countries."

Next week, these signatures, gathered from citizens in all 50 states, will be delivered to the U.S. Senate as a first step toward stopping the destructive Warner-Lieberman bill which would raise the cost of gasoline, diesel fuel, heating oil, and aviation fuel.

About video: President Bush urged Congress to support legislation designed to help prop up the mortgage industry and to lift its ban on offshore drilling to help increase domestic oil...
Raw News Video posted on YouTube by CBS