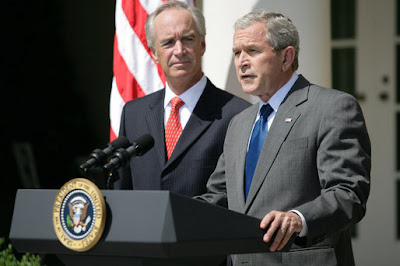 About Photo: As U.S. Interior Secretary Dirk Kempthorne looks on, President George W. Bush delivers a statement on energy Wednesday, June 18, 2008, in the Rose Garden of the White House. Calling on Congress to expand domestic oil production, the President said, "For many Americans, there is no more pressing concern than the price of gasoline. Truckers and farmers and small business owners have been hit especially hard. Every American who drives to work, purchases food, or ships a product has felt the effect. And families across our country are looking to Washington for a response."
Read the full Transcript HERE
Has video, audio and more
White House photo by Luke Sharrett

* ABCNews.com has this news article up and it goes in part like this... As the presidential election revs into high gear, President Bush drilled the "Democratic-controlled Congress" for opposing White House energy policies, which he said has resulted in the rise of "gas prices to record levels."... If Congressional leaders leave for the Fourth of July recess without taking action, they will need to explain why $4-a-gallon gasoline is not enough incentive for them to act. And Americans will rightly ask how high oil -- how high gas prices have to rise before the Democratic-controlled Congress will do something about it," Bush said in the Rose Garden...
Read the full article at link below...
Bush Says Dems to Blame for High Gas Prices

* Newsweek.com has this great read and it goes in part like this... There's something about the heavy air here that puts visions of drilling in the mind. On Tuesday, John McCain, who came to pander to the local oil industry, called for a reversal of the 27 year ban on offshore drilling. (President Bush echoed it today), and threw in a plea to drill in the Arctic National Wildlife Refuge for good measures). After two days here, chatting with people in the oil industry, and with the many locals who benefit from it, I was ready to wade into the waters off of Boca Raton, Florida, and start prospecting for black gold...
Read the rest at link below...
Drilling for Answers

* Boston.com reports...
Obama on oil drilling: 'Not a long-term solution'

News Video posted on Web by NECN.com
This video is funny... yet sadly predictable

* VOTE DBD for a Better Tomorrow *

How can I help you ask...?
By Clicking-Out AmericanSolutions Home Page HERE
Sign the Petition...
* Watch this video by Newt Gingrich HERE *
Then pass it on to others...