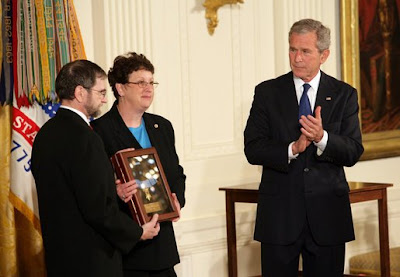 About Photo: President George W. Bush leads the applause in honor of Private First Class Ross A. McGinnis, U.S. Army, after presenting the Congressional Medal of Honor posthumously to his parents, Tom and Romayne McGinnis, of Knox, Pennsylvania, during ceremonies Monday, June 2, 2008, at the White House.
White House photo by Chris Greenberg

"The Medal of Honor is the nation's highest military distinction; it is given for valor beyond anything that duty could require or a superior could command," Bush said, before presenting the medal to McGinnis' father and mother, Tom and Romayne McGinnis, during the East Room ceremony.

Then- Pfc. McGinnis died at age 19 in northeastern Baghdad on Dec. 4, 2006, while protecting his comrades from an enemy grenade that was thrown into his Humvee. McGinnis, who'd been riding topside in the vehicle's gunner's-hatch opening, dropped down and used his body to absorb the effects of the exploding grenade, thus saving four fellow soldiers.

Presenting the Medal of Honor to McGinnis' parents was "a high privilege," Bush said, noting McGinnis was a selfless hero who could easily have jumped off the vehicle and saved himself.

"Instead, he dropped inside, put himself against the grenade and absorbed the blast with his own body," Bush said. "In that split-second decision, Private McGinnis lost his own life and he saved his comrades."

Thomas has noted that McGinnis had plenty of time to avoid the exploding grenade, the president said, but instead chose to save his buddies.

"America will never forget those who came forward to bear the battle," Bush vowed. "America will always honor the name of this brave soldier, who gave all for his country."

McGinnis enlisted in the Army at age 17 on June 14, 2004. At the time of his death, McGinnis was assigned to the 1st Infantry Division's 1st Battalion, 26th Infantry Regiment, 2nd Brigade Combat Team, in Schweinfurt, Germany. He was promoted to specialist posthumously.

McGinnis' family received their son's Silver Star and Purple Heart medals in December 2006 at a memorial service held in their hometown of Knox, Pa., about 60 miles northeast of Pittsburgh. 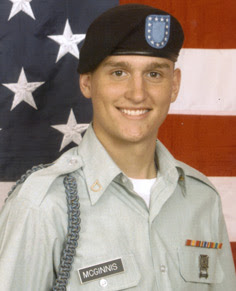 MY FAVORITE HERO
A post by our good friend Chrys at PETTIFOG
Very nice tribute, Chrys