Mike Fossum and Ron Garan are scheduled to kick off STS-124’s first spacewalk this Tuesday morning at 10:32am CDT
. 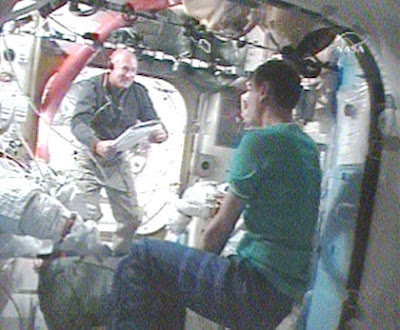 About Photo: STS-124 Commander Mark Kelly works inside the Quest airlock with Expedition 17 Commander Sergei Volkov.
Photo credit: NASA TV
*************
.
Mike Fossum and Ron Garan are scheduled to kick off STS-124’s first spacewalk at 10:32am CDT. During the 6-½ hour excursion, the pair will retrieve a shuttle inspection tool, service and inspect components of a solar alpha rotary joint and prepare the largest component of the Japan Aerospace Exploration Agency’s Kibo laboratory for installation on the International Space Station.

.
The spacewalkers’ first task is to transfer the Orbiter Boom Sensor System (OBSS) from the station’s truss to space shuttle Discovery. The OBSS, which attaches to the shuttle’s robotic arm for detailed inspection of the shuttle’s heat shield, was left at the station for STS-124 during the previous shuttle mission to provide room for the giant Kibo module in Discovery’s payload bay.
.
Next, the spacewalkers will prepare Kibo’s Japanese Pressurized Module (JPM) for installation. After inspecting the common berthing mechanism on the Harmony Node’s left side and opening a window cover, Fossum and Garan will work together in the shuttle’s cargo bay to remove contamination covers from the JPM’s docking surfaces. Fossum will also disconnect heater cables and remove locking bolts from the shutters of the JPM’s forward window.
.
For their final tasks, Garan and Fossum will move to the station’s starboard solar alpha rotary joint, which began experiencing increased vibration and power usage in the fall of 2007. Garan will install a replacement of one of the joint’s 12 trundle bearing assemblies. Meanwhile, Fossum will inspect a potentially damaged area on the joint and try out several techniques for cleaning debris from the surface of the joint’s race ring.
.
While Fossum and Garan work outside the orbital outpost, mission specialists Karen Nyberg and Akihiko Hoshide will use the station’s robotic arm to remove the JPM from the shuttle’s payload bay and install it on Harmony.

Mission Specialists Mike Fossum and Ron Garan will review procedures for their second spacewalk today and sleep in the U.S. Quest airlock tonight to purge the nitrogen from their bodies. During Thursday’s spacewalk, the second of the mission, the spacewalkers will outfit the new lab and prepare the Japanese logistics module for relocation.
Info from NASA website