President Bush’s
Saturday Radio Address
June 21, 2008
THE PRESIDENT: Good morning. Americans are concerned about the high price of gasoline. Everyone who commutes to work, purchases food, ships a product, or takes a family vacation feels the burden of higher prices at the pump. And families across our country are looking to Washington for a response. 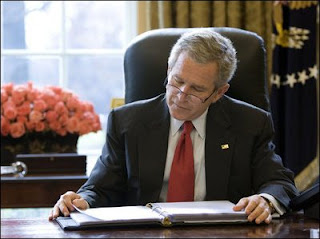 The fundamental problem behind high gas prices is that the supply of oil has not kept up with the rising demand across the world. One obvious solution is for America to increase our domestic oil production. So my Administration has repeatedly called on Congress to open access to new oil exploration here in the United States. Unfortunately, Democrats on Capitol Hill have rejected virtually every proposal. Now Americans are paying the price at the pump for this obstruction. So this week, I asked Democratic congressional leaders to take the side of working families and small businesses and farmers and ranchers and move forward with four steps to expand American oil and gasoline production.

First, we should expand American oil production by increasing access to the Outer Continental Shelf, or OCS. Experts believe that the OCS could produce enough oil to match America's current production for almost ten years. The problem is that Congress has restricted access to key parts of the OCS since the early 1980s. So I've called on the House and Senate to lift this legislative ban and give states the option of opening up OCS resources off their shores while protecting the environment. There's also an executive prohibition on exploration in the OCS, which I will lift when Congress lifts the legislative ban.

Second, we should expand American oil production by tapping into the extraordinary potential of oil shale. Oil shale is a type of rock that can produce oil when exposed to heat and other processes. One major deposit in the Rocky Mountain West alone would equal current annual oil imports for more than a hundred years. Unfortunately, Democrats in Congress are standing in the way of further development. In last year's omnibus spending bill, Democratic leaders inserted a provision blocking oil shale leasing on Federal lands. That provision can be taken out as easily as it was slipped in -- and Congress should do so immediately.

Third, we should expand American oil production by permitting exploration in northern Alaska. Scientists have developed innovative techniques to reach this oil with virtually no impact on the land or local wildlife. With a drilling footprint that covers just a tiny fraction of this vast terrain, America could produce an estimated 10 billion barrels of oil. That is roughly the equivalent of two decades of imported oil from Saudi Arabia. I urge members of Congress to allow this remote region to bring enormous benefits to the American people.

Finally, we need to expand and enhance our refining capacity. It has been 30 years since a new refinery was built in our Nation, and lawsuits and red tape have made it extremely costly to expand or modify existing refineries. The result is that America now imports millions of barrels of fully refined gasoline from abroad.

This imposes needless costs on American families and drivers. It deprives American workers of good jobs. And it needs to change.

I know Democratic leaders have opposed some of these policies in the past. Now that their opposition has helped drive gas prices to record levels, I ask them to reconsider their positions. If congressional leaders leave for the Fourth of July recess without taking action, they will need to explain why $4-a-gallon gasoline is not enough incentive for them to act.

This is a difficult time for many American families. Rising gasoline prices and economic uncertainty can affect everything from what food parents put on the table to where they can go on vacation. With the four steps I've laid out, Congress now has a clear path to begin easing the strain high gas prices put on your family's pocketbook. These proposals will take years to have their full impact, so I urge Congress to take action as soon as possible. Together, we can meet the energy challenges we face -- and keep our economy the strongest, most vibrant, and most hopeful in the world.