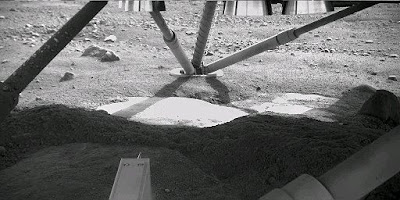 The Robotic Arm Camera on NASA's Phoenix Mars Lander captured this image underneath the Lander on the fifth Martian day, or sol, of the mission. Descent thrusters on the bottom of the Lander are visible at the top of the image.

This view from the north side of the Lander toward the southern leg shows smooth surfaces cleared from overlying soil by the rocket exhaust during landing. One exposed edge of the underlying material was seen in Sol 4 images, but the newer image reveals a greater extent of it. The abundance of excavated smooth and level surfaces adds evidence to a hypothesis that the underlying material is an ice table covered by a thin blanket of soil.

The bright-looking surface material in the center, where the image is partly overexposed may not be inherently brighter than the foreground material in shadow.

The Phoenix Mission is led by the University of Arizona, Tucson, on behalf of NASA. Project management of the mission is by NASA's Jet Propulsion Laboratory, Pasadena, Calif. Spacecraft development is by Lockheed Martin Space Systems, Denver.
Info from NASA.gov website
Image Credit: NASA/JPL-Caltech//University of Arizona/Max Planck Institute

Gizmodo.com reports it this way...
The landing thrusters aboard the Phoenix Mars Lander apparently did their job and them some. First, they successfully fired and gently deposited the multimillion dollar probe on the surface of the Red Planet. And then, by doing just that, they blew away three to six inches of Martian soil to reveal the shiny, slick face of what could be a large ice patch. Brendan Fraser's frozen caveman body was noticeably absent from this block of ice, but NASA scientists were elated anyway...
NASA Phoenix Lander Finds Water On Mars!