Acting on intelligence information, coalition forces this morning targeted the suspected Kataib Hezbollah facilitator during an operation in Amarah in Iraq’s Maysan province, which borders Iran.

Kataib Hezbollah, also known as Hezbollah Brigades, is a terrorist group believed to receive funding, training, logistics and material support from Iran to attack Iraqi and coalition forces using what the military calls “explosively formed penetrators,” or EFPs – roadside bombs designed to pierce armor-hulled vehicles – and other weapons such as rocket-assisted mortars. The group is believed to be responsible for a June 4 explosion in the Shaab district of Adhamiyah in Baghdad that killed 16 Iraqi civilians and injured 29 others, officials said.

The suspect and his associates were detained without incident. During their search, troops discovered more than $50,000 in U.S. currency and nearly 12 million Iraqi dinar, the equivalent of about $10,000, officials said.

It was the second blow to the leadership of terrorist networks in Iraq in two days, officials said. Yesterday, coalition forces captured a suspected terrorist and an additional suspect during an operation near Tikrit, about 100 miles north of Baghdad, they said. During that operation, the suspect surrendered to coalition forces and identified himself as the wanted man believed to be an al-Qaida in Iraq cell leader in the area.

During the operation, troops also seized five AK-47 assault rifles with 32 magazines, a 9 mm pistol with three magazines, a shotgun and 60 shotgun shells, an SKS rifle, a rocket-propelled grenade launcher, a fragmentation grenade, a scope and nine magazines for a Dragonov rifle and 3,000 rounds of small-arms ammunition. 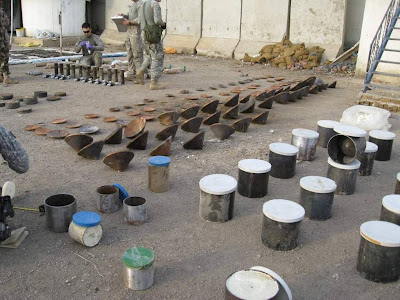 About Photo: EFPs, EFP Cones and other materials seized in Oct. 28th raid
Photo courtesy of Multinational Division Baghdad
.
The Long War Journal website has a great post today on Iran in Iraq.
Click it out at link below...
Iraqi troops find EFP factory in Sadr City
Above link has lots of info, maps and more...
Posted by AubreyJ......... at 10/30/2008 07:12:00 AM