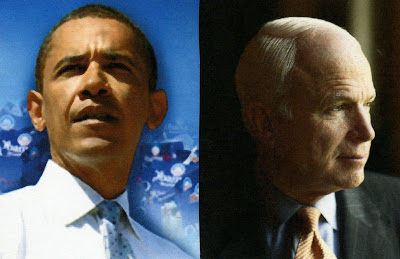 .
Tonight’s third and final Presidential Debate will start at 8:00pm CDT and will be moderated by CBS Newsman Bob Schieffer.

Going into tonight’s Debate... a poll released today by Reuters, C-SPAN and Zogby shows Obama with just a 4-point national lead over McCain.

This latest four-day tracking poll, among likely U.S. voters, shows Obama leading McCain 48% to 44%. They say this poll has a margin of error of 2.9 percentage points... but the way I see it... if McCain is within 8 to possibly even 10 points of Obama... McCain WINS!!!

I don’t know about you but I sure am hoping Senator McCain brings up, in detail, the Ayers-Obama connection tonight. I for one see it as MORE than just questionable judgment on Obama’s part... but a sure sign of just how Obama thinks and what he REALLY believes in...

I don't know about you... but I for one enjoyed it! By the look at times on Obama’s face... I’d say I surely enjoyed it much more than he.

Now... who won the debate tonight? I’d say... “Joe the Plumber” did! And that should help move the Polls up, over the next few days, for Senator John McCain.

Fighting for Joe the Plumber

"John McCain won tonight's debate with strong, clear straight talk about setting a new direction for our country and fighting for working families. He outlined a specific, bold plan for creating jobs, helping those near retirement, keeping people in their homes, curbing spending, lowering health care costs and achieving energy independence. He vowed to fight for 'Joe the Plumber' every day he is President and he affirmed his belief that we shouldn't raise taxes just to 'spread the wealth.' While Barack Obama is measuring the drapes and campaigning against a man not even on the ballot, John McCain demonstrated that he has the experience, judgment, independence and courage to fight for every American."