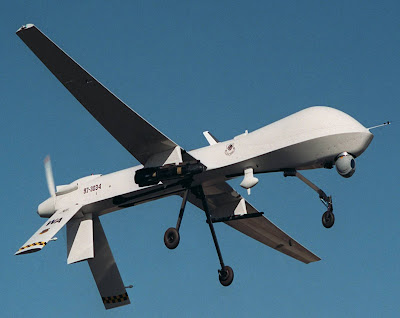 .Telegraph.co.uk brings us the following report... A missile strike by an unmanned US drone inside Pakistani territory has killed at least six people, the country's intelligence officials said... The missiles struck the home of a local Taliban commander before midnight on Tuesday near Mir Ali, a town in North Waziristan - a known haven for the Taliban and al-Qaeda fighters near to the Afghan border - according to field agents... It is believed that up to nine people have been injured in the attack, which will ratchet up tensions between the Pakistani and US governments...
Read the full report at link below...
Pakistan: US drone strike kills six people
.
The Guardian website has this take on the Missile Strike in Pakistan. It starts off like this... A suspected US drone killed at least six people in a missile strike in the Pakistani tribal region of North Waziristan near the Afghan border, officials said today... The strike came amid reports that Pakistan's top Taliban leader, Baitullah Mehsud, had died after illness. Pakistani officials have accused Mehsud over the assassinated of the former Prime Minister Benazir Bhutto after her return from exile...
Read the rest at link below...
US drone suspected of deadly attack on Pakistan border with Afghanistan
USAF Courtesy Photo
Posted by AubreyJ......... at 10/01/2008 01:15:00 PM

Email ThisBlogThis!Share to TwitterShare to FacebookShare to Pinterest
Labels: On Ground Updates, Pakistan