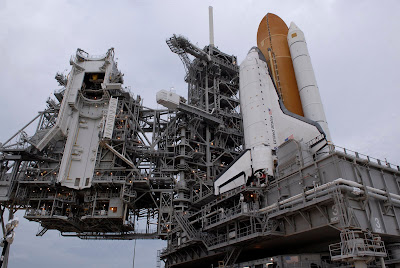 .Oct. 23, 2008 -- Space shuttle Endeavour began moving off Launch Pad 39B at NASA’s Kennedy Space Center on Thursday morning at 8:28. It will take about seven hours to reposition the shuttle for launch on Launch Pad 39A. Launch is targeted for Nov. 14 at 7:55 p.m. EST.

Endeavour will carry the Leonardo cargo module, NASA’s version of a U-Haul, to the International Space Station during the mission, which is designated STS-126. The Leonardo is carrying about 9 1/2 tons of equipment and supplies.

The Leonardo module is waiting inside a clean room at the launch pad. It will be bolted inside Endeavour’s payload bay after the shuttle is in place on the launch pad.
.
***********************
.
Here are some Interesting Links:
.
› STS-126 Mission Summary (pdf)
› Shuttle Section
.
> International Space Station
Click HERE for some cool shuttle mission imagery that points out significant changes in the configuration of the Space Station over the past few years
.
Above info/links/photos from the NASA.gov website
Posted by AubreyJ......... at 10/23/2008 01:14:00 PM