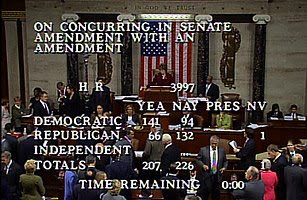 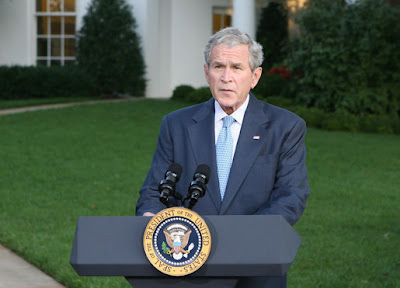 About above photo: President George W. Bush delivers a statement at the White House early Monday morning, 7:34am EDT, September 29, 2008, on Financial Rescue Legislation. (This statement was made before the House Vote went down.) Said the President... “This legislation deals with complex issues, and negotiators were asked to address them in a very short period of time. I appreciate the leadership of members on both sides of the aisle, who came together when our nation was counting on them. Negotiations are sometimes difficult, but their hard work and cooperation paid off.”
FULL TRANSCRIPT/VIDEO HERE
White House photo by Chris Greenberg

About video: The above video is part of Speaker Pelosi’s Floor Speech that went over the top this morning and turned a few Republicans away from voting, YEA.
Video posted on YouTube by JohnBoehner
.
**********************
.
Boehner on CBS Evening News: House GOP Leader Discusses Today's Vote on Economic Rescue Bill

Washington (September 29th) - In an interview tonight on the CBS Evening News with Katie Couric, House Republican Leader John Boehner (R-OH) discussed today’s vote on an economic rescue package and underscored the need for a bipartisan solution that protects families, seniors, small businesses, and taxpayers. During his interview, Boehner made clear that Congress must work together to protect Americans and their jobs, their retirement security, their bank accounts, and their college loans.
Full video and a transcript HERE