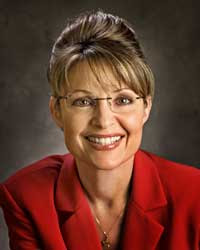 Thursday, September 18, 2008
The JTA website brings us this bit of news this Thursday evening and it starts 0ff like this... Sarah Palin is being disinvited from the Jewish-sponsored Iran rally, sources told JTA... The move follows two days of controversy for organizers of next Monday’s rally to protest Iranian President Mahmoud Ahmadinejad at the United Nations... The controversy erupted after JTA reported that Palin, the Republican vice-presidential nominee, had accepted an invitation from the Conference of Presidents of Major American Jewish Organizations to speak at the event. The news of Palin’s participation prompted Sen. Hillary Clinton (D-N.Y.), who had pledged several weeks earlier to speak at the rally, to announce she was withdrawing from the event...
Read the rest HERE