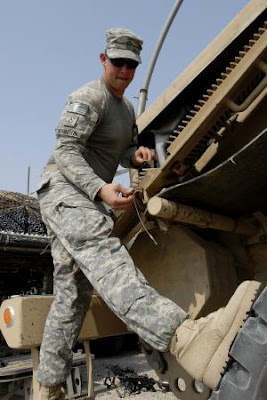 Pfc. Thomas Johnson, a combat engineer with 38th Engineer Company, 4th Stryker Brigade Combat Team, 2nd Infantry Division, checks the oil levels of his Mine-Resistant Ambush-Protected vehicle Aug. 18th. Johnson, a Phoenix, native, and a fellow soldier drove the MRAP in front of a formation of Stryker armored vehicles all the way to the Iraq border to provide route clearance and ensure that the unit’s exit near the end of Operation Iraqi Freedom was successful.
Photo by Pfc. Kimberly Hackbartk
.
Soldiers of the 4th Stryker Brigade Combat Team have just completed a yearlong tour supporting U.S. Division-Center area of operations in and around Baghdad, assisting, training and advising the Iraqi security forces.
.
As a memoir of the last combat brigade in Iraq during Operation Iraqi Freedom, the rest of the crew said their final goodbyes to Iraq into their digital cameras before entering Kuwait and ending their final deployment to Iraq.
.
The team of combat engineers helped clear the way for the symbolic convoy out of Iraq, reminiscent of U.S. forces first pushing into Iraq at the beginning of OIF in 2003, driving down a route similar to the one service members entered the country through several years prior. The nearly seven-year conflict came to an end as the last tires crossed the border into Kuwait, ushering in Operation New Dawn and marking a new beginning for the people of Iraq.
.
Most soldiers, including Johnson and Porter, said they did not expect to be behind the steering wheel, leaving Iraq by ground vehicle to make the drive to Kuwait.
.
“I thought we’d fly out of here,” Porter said.
.
The longing to redeploy eventually wore down soldiers in the brigade to the point where the mode of exit no longer mattered, so long as it meant they were returning home soon.
.
While people in the back of Strykers and MRAPs had the opportunity to nap during the two-day trip, the gunners, drivers and vehicle commanders stayed awake, focused and alert to their surroundings. Energy drinks, daytime naps and casual conversations among crew members kept the weary drivers going.
.
“I was thinking about doing my job proficiently and getting everybody there safely,” Johnson said. “If I don’t get everyone there safely, then we fail the mission. And I’m all about completing the mission,” he said, mentioning that part of his mission was returning home to his wife.
.
The team made it without sustaining any attacks, which is a major improvement from veteran combat engineers’ experiences during earlier OIF rotations.
.
Because security has improved over time as Iraq has become more stable, certain aspects of later deployment cycles have changed as well.
.
“Yeah, we trained to kick in doors, we trained to clear buildings, we trained to react to contact, but every single one of us knew what we were going to be doing—riding in a truck looking for [improvised explosive devices],” Porter said.
.
For Johnson, a Phoenix native, and Porter, an Ashland, Wisc., native, training for driving the Buffalo-style MRAP, a large vehicle with a mechanical arm for interrogating potential IEDs and threats, began during the brigade's June rotation at the Joint Readiness Training Center at Fort Polk, La.
.
Soldiers trained on a 5-ton truck frame with a Buffalo cab welded onto it. It was not until arriving in Iraq they had an opportunity to get behind the wheel of the real thing.
.
A year later, as Johnson drove his team past the gates leading out of Iraq and concluding their last patrol in Iraq, he said he felt a long-awaited feeling.
.
“It's a feeling of success that you did what you were expected to do for a whole entire year, then coming to the end of your tour and finishing it out strong,” he said.
.
.....................................................................
.
Here’s a report written and posted last week
Last American combat brigade departs
Written by Spc. Luisito Brooks and Pfc. Kimberly Hackbarth, 4th Stryker Brigade Combat Team, 2nd Infantry Division - Originally posted Tuesday, August 10, 2010
.
FOB CONSTITUTION – Gen. Ray Odierno, commander of United States Forces – Iraq, and the Iraqi Minister of Defense, Abdel Qader Jassim, and other U.S. and Iraqi leaders watched yesterday as a joint color guard marched crisply across the parade field here to where their unit and national flags were displayed. 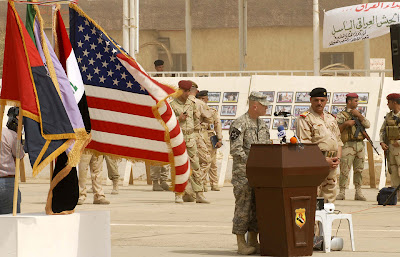 .
Col. John Norris, commander, 4th Stryker Brigade Combat Team, 2nd Infantry Division, gives a speech alongside his counterpart, Staff Maj. Gen. Ahmed, commander, 6th IA Division, during the brigade’s farewell ceremony at Forward Operating Base Constitution, Aug. 7, 2010.
USF-I photo
.
The U.S. Soldiers, members of the 4th Stryker Brigade Combat Team, 2nd Infantry Division “Raiders,” knelt and removed the American flags from the display. After executing a left face, the detail marched off the field from the direction they came, leaving only the 6th Iraqi Army Division and Iraqi flag remaining on the field.
.
This gesture—symbolizing the departure of the Raider Brigade and the commitment of Iraqi Security Forces to the people of Iraq—brought the 4th SBCT, 2nd Inf. Div. one step closer to the end of their yearlong deployment as the last combat brigade to serve here in support of Operation Iraqi Freedom.
.
By Aug. 31, all U.S. combat missions in Iraq will end, and the 50,000 U.S. troops remaining in country under Operation New Dawn will move toward stability operations, advising, training and assisting the ISF in building civil capacity.
.
The Aug. 7 departure ceremony, hosted by the 6th IA Div. served as both a farewell to the Raider Brigade and a look at the capabilities of the Iraqi Soldiers who will be assuming full responsibility for the area.
.
Col. John Norris, commander of 4th SBCT, stood alongside Staff Maj. Gen. Ahmed, commander the 6th IA Div., and thanked the guests in attendance for joining him in celebrating what he called, “a new chapter in the ongoing story that is Iraq’s strategic partnership.”
.
“Together, we have forged strong bonds of partnership and unity of effort, where the Iraqi government, the Iraqi Army and Police are connected to the people, partnered with the Federal Police, as well as the Traffic and Patrol Police forces, Sons of Iraq, [and] along with the United States Military and Department of State, created irreversible momentum toward a peaceful and prosperous Iraq,” Ahmed said.
.
The 4th SBCT Soldiers’ focus in Iraq was on building a strong partnership with the ISF to ensure the security of the March 7 Iraqi national elections and improving the overall quality of life for the Iraqi people.
.
Arriving in country in September 2009, the brigade immediately began partnering with local ISF leadership to gain a sense of their Iraqi partners’ capabilities and relationships with community leaders and other Iraqi security organizations.
.
Among their many achievements, 4th SBCT Soldiers introduced military working dogs to the ISF—a program that had been unsuccessful until the Raiders’ arrived— improving their ability to uncover weapons, explosives and other illegal items during raids and searches.
.
The latest in evidence collection and other forensic techniques was also taught to the ISF, allowing for improved site exploitation after terrorist attacks and led to the first warrant using DNA evidence to be issued in Iraq’s history.
.
Raider Soldiers, in conjunction with two embedded Provincial Reconstruction Teams, and partners in the U.S. Agency for International Development and the Army Corps of Engineers, strived to continue the development and reconstruction of western Baghdad, Abu Ghraib, Tajiand and Tarmiyah.
.
A few hundred feet away from where the departure ceremony took place was the FOB Constitution Joint Operations Center, where Norris and his ISF partners monitored the Iraqi national elections, accessing the latest on-the-ground information from polling sites throughout western Baghdad.
.
Another key achievement during th deployment was helping the IA expand the JOC concept to include the Iraqi Police, where they could share the latest intelligence, surveillance and reconnaissance information in a centralized location.
.
“Together, this collective group has more successes than I can list here today, but one that I will highlight as a prime example of the strength of this partnership is the national election conducted in March,” Norris said. “After weeks of detailed preparation, long hours and security in place ... the Iraqi national elections commenced with a record turnout.”
.
Norris said more than 60 percent of Iraqi citizens went to the polls to cast their ballot, showing solidarity against violent extremist groups.
.
“I am confident that the Iraqi government will move forward, and that the hopes and the dreams of a free and stable Iraq will become a reality,” he said.
.
In a display for gathered dignitaries, 6th IA Soldiers presented several demonstrations showing their capabilities in handling a variety of real-world situations they may encounter.
.
Iraqi Soldiers cleared and secured a building, set up a traffic control point, neutralized an improvised explosive device using a remote-controlled robot and partnered with Raider Soldiers to show off hand-to-hand combat techniques.
.
For the Raider Soldiers, the departure ceremony marked the end of a job well done that will have a lasting impact on the people of Iraq.
.
“We depart having accomplished our mission to the fullest of our ability, with honor and respect [and] the Raider Brigade’s legacy and reputation intact,” Norris said. “This is only the beginning of Iraq’s continued success and forward progress.”

Email ThisBlogThis!Share to TwitterShare to FacebookShare to Pinterest
Labels: On Ground Updates: Iraq