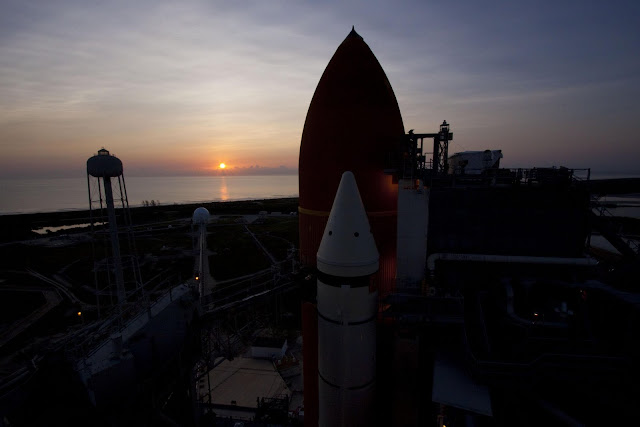 Seaside Sunrise
Photo taken: June 23, 2011
The sun rises over the Atlantic Ocean silhouetting Space Shuttle Atlantis' external fuel tank and solid rocket boosters on Launch Pad 39A at NASA's Kennedy Space Center in Florida... The STS-135 crew members showed up at the pad shortly after and where strapped into their respective seats on Atlantis for a simulated launch countdown as part of the Terminal Countdown Demonstration Test (TCDT) and related training.
Photo credit: NASA/Jim Grossmann
.................................
.
- Latest on FINAL MISSION of Space Shuttle Atlantis STS-135 -
Atlantis and Crew Prepared for July 8th Liftoff
Wednesday, 29 June 29, 2011
07:48am CDT
...
Launch pad technicians at NASA's Kennedy Space Center in Florida are in the process of closing out Space Shuttle Atlantis' payload bay in preparation for liftoff from Launch Pad 39A on July 8th at 11:26am EDT. The bay's doors are expected to be closed for flight today.
.
This follows yesterday's day-long Flight Readiness Review at which senior NASA and contractor managers confirmed that Atlantis is ready for this last shuttle flight to supply the International Space Station.
.
"This flight is incredibly important. The cargo that is coming up on this flight is really mandatory for space station," said Bill Gerstenmaier, assistant administrator for space operations, following yesterday's review.
.
In preparation for this final mission of the Space Shuttle Program, the STS-135 astronauts will undergo their L-10 physicals today at NASA's Johnson Space Center in Houston.
All above info/photo taken from the NASA.gov website﻿
.
...................
AubreyJ.........
.
Posted by AubreyJ......... at 6/29/2011 04:28:00 PM No comments:


* JTA.org brings us the latest report out of Israel on all this New Gaza Flotilla mess and it starts off like this... Prime Minister Benjamin Netanyahu ordered Israeli authorities to formulate a special procedure for journalists who are arrested on board the Gaza flotilla... The order Monday came a day after the head of Israel's Government Press Office threatened to deny entry to the country for ten years to any journalist who participates in the flotilla... Netanyahu said in a statement that the policy for journalists covering the flotilla should not be the same as against infiltrators and those who enter Israel illegally... Members of the Israeli media and international journalists will be embedded in Israeli Navy vessels in contact with the flotilla "in order to create transparency and credible coverage of the events," said a statement issued Monday from the Prime Minister's Office...
Read this report in full at link below...
Israel drops threats to journalists who participate in Gaza flotilla
.
* AhramOnline has this report posted up on their website earlier this Monday morning and it starts off like this... Pro-Palestinian activists from 22 countries plan to set sail in an international flotilla for Gaza from the coast of Crete on Thursday or Friday, organisers said Monday... “Thursday or Friday, nine or 10 boats should meet up in the Libyan Gulf,” Vaguelis Pissias, one of the Greek organisers of the flotilla, said at a press conference with representatives from the international organisations involved...
Read this report in full at link below...
Flotilla for Gaza to sail 'Thursday or Friday' from Crete
.
* VOANews.com has this report...
Israel Orders Military to Stop Gaza Aid Flotilla
.
**************************
.
New Gaza Flotilla Set to Sail...
About above News Video: A flotilla carrying humanitarian aid bound for Gaza is set to depart from Greece. Israel has already warned that it won't let the convoy reach its destination. It was also said earlier that foreign journalists who took part would be banned from working in Israel for 10 years... though this was changed late Monday morning. 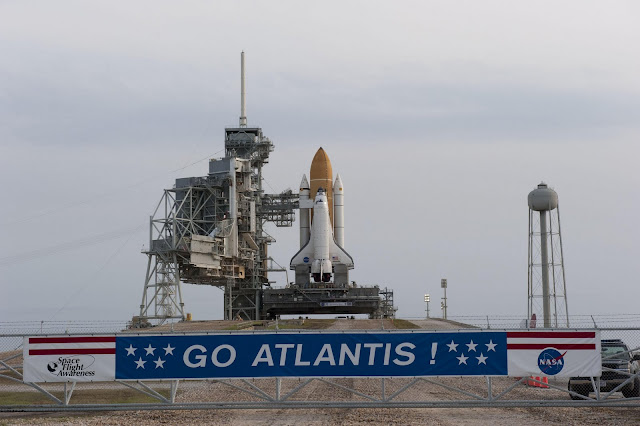 Go Atlantis!
A banner proclaims the sentiments of Kennedy's work force at Launch Pad 39A at NASA's Kennedy Space Center in Florida, after Space Shuttle Atlantis completed its historic and final journey from the Vehicle Assembly Building. Atlantis was secured or "hard down," at its seaside launch pad at 3:29am EDT on Wednesday, June 1st.
Photo credit: NASA/Kim Shiflett
Posted by AubreyJ......... at 6/14/2011 03:42:00 PM No comments: 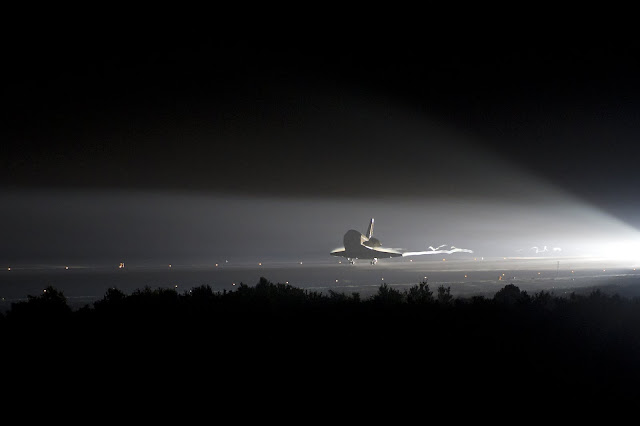