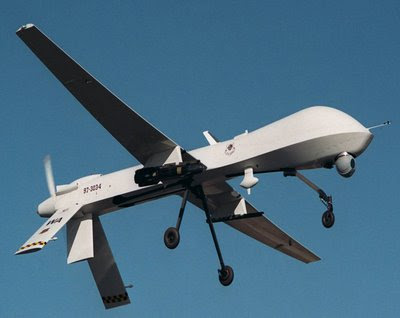 USAF Courtesy Photo
.
* Guardian.co.uk brings us the following news out of Pakistan today and their report starts off like this... Suspected US missiles struck two vehicles in a Taliban stronghold near the border with Afghanistan today, killing 18 alleged militants, according to Pakistani intelligence officials. The attack in the North Waziristan tribal region came at the end of a year that has seen an unprecedented number of US drone strikes on Pakistani soil, part of a ramped-up US campaign to take out al-Qaida and Taliban fighters seeking sanctuary outside Afghanistan...
Read the full report at link below...
Pakistan: Suspected US drone strike against Taliban kills 18
.
* LATimes.com reports it this way... Missiles presumably fired by U.S. drones on Monday incinerated three trucks thought to be ferrying fighters and weapons from Pakistan's tribal borderlands to Afghanistan. The strikes killed 25 suspected militants and injured four others, according to Pakistani intelligence officials... A campaign of American drone strikes against militants in the tribal areas has dramatically accelerated this year, targeting members of groups including the Taliban, an offshoot organization known as the Haqqani network, and Al Qaeda...
Read the rest of this report at link below...
Missile strike inside Pakistan kills 25 suspected insurgents

Email ThisBlogThis!Share to TwitterShare to FacebookShare to Pinterest
Labels: Afghanistan/Pakistan, On Ground Updates