Israel: ON Ground Updates
IDF Navy Fighters Intercept Vessel Loaded With Weaponry - Five Israeli Family Members Murdered in Itamar
Tuesday, March 15, 2011
Earlier today... Prime Minister Benjamin Netanyahu discussed IDF's success in thwarting the smuggling of weapons on board the Victoria Cargo Vessel.
.
He said in part... “We had reasonable grounds to believe that there were weapons on board which were intended to be used to harm Israeli citizens”... “The origin of the weapons was Iran, which is trying to arm the Gaza Strip”...  “The seizure was made at sea according to international laws and the ship is being led to Ashdod.” Netanyahu further added that Israel has updated all the countries involved in the situation.
............................................
.
-- The following are reports I ran across on the IDF Website --
. 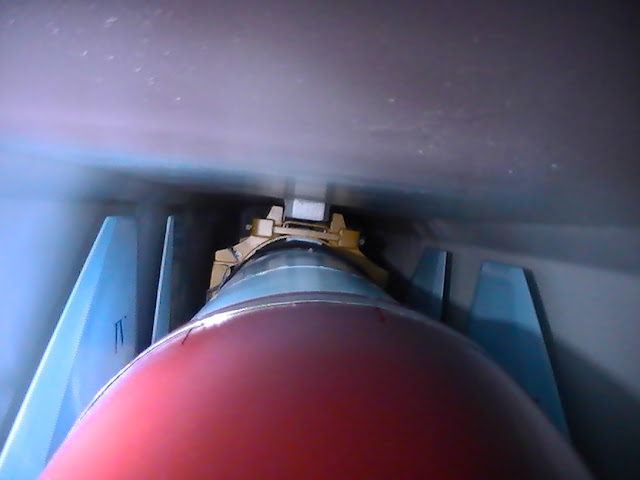 An Israeli Navy ship approached the "Victoria" cargo ship after requesting to board. The ship's crew and captain complied, and with their full cooperation and to their surprise, their ship was found to contain various weaponry, including many mortar shells, and advanced anti-ship missiles with a 35 km range... The ship had initially departed from the Syrian port of Lattakia.
.....
..........................
.
Anti-ship Missiles and Guidebooks Found on Victoria
Tuesday, March 15, 2011
.
Among weapons found on the deck of the Victoria on Tuesday (March 15th), Navy Commando 13 soldiers found C-704 anti-ship missiles equipped with radars and a range of 35 kilometers. “These are strategic weapons. If Hamas gets its hands on them they would seriously damage strategic infrastructure at sea and at shore,” said Israel Navy Chief Brig. Gen. Rani Ben-Yehuda.
.
According to Brig. Gen. Ben Yehuda, these types of missiles are dangerous not just to Navy ships but also to civilian vessels usually arriving at the Ashdod Harbor. "Because the missiles can be programmed to work automatically, they pose a threat to any additional targets within their range. They are easier to control and mobilize than previous missiles," he explained.
.
According to IDF intelligence gathering, Hamas does not currently carry missiles of this type in the Gaza Strip. That said, The Hezbollah terrorist organization in Lebanon does have similar capabilities.
.
The Navy Chief added that guidebooks in Farsi were found on the ship along with other symbols of the Army of the Guardians of the Islamic Revolution, another indication that the Victoria was an Iranian attempt to shift the order of power in the Middle East.
.
..............................................................
.
Israel Navy Uncovers Weaponry on board Cargo Vessel
Tuesday, March 15, 2011
.
On Tuesday morning (Mar. 15th), IDF Navy fighters intercepted the cargo vessel Victoria which was loaded with weaponry. The vessel, flying under a Liberian flag, was intercepted some 200 miles west of Israel's coast. This incident was part of the Navy's routine activity to maintain security and prevent arms smuggling, in light of IDF security assessments.
.
Security forces were met with no resistance from the crew on-board.
The Israeli Navy is now leasing the vessel to an Israeli port for further, detailed inspection of the cargo.
.
The vessel was on its way from Mersin Port in Turkey to Alexandria Port in Egypt.
According to assessments, the various weapons on board the vessel were intended to be used by terror organizations operating in the Gaza Strip.
.
The IDF would like to note that Turkey is not tied to the incident in any way.
.
- To see pictures of weapons found onboard the Victoria, click here
.
The operation was approved, understood to be necessary and carried out according to government instruction following the Chief of the General Staff's recommendations.
Earlier on Tuesday morning, Lt. Gen. Benny Gantz updated the Minister of Defense, Ehud Barak, about the findings on board the vessel.
.
The IDF and the Ministry of Foreign Affairs were alerted German authorities about Victoria’s interception as the ship was German property. In addition, the government of Liberia, whose flag it was flying under, was notified, as well as France because of its French shipping company.
.
The operation was under the command of Commander of the IDF Navy, Maj. Gen. Eliezer Marom, and the interception was under the command of Special Navy Forces Commander.
.
The vessel's crew and content will be transferred to an Israeli port for questioning and further inspection.
.
The IDF will continue its intelligence and operational activities in order to maintain Israel's security and prevent arms smuggling that will fuel the terror and strengthen its infrastructure in the Gaza Strip and in Lebanon.
.
According to shipment documents and crew questioning, the vessel initially departed from Lattakia Port in Syria and then proceeded to Mersin Port in Turkey. Turkey has no connection to this incident regarding weaponry uncovered on board.
...................................................
.
Five Family Members Stabbed to Death in West Bank Settlement of Itamar

.Image credit MFA.gov
.
At least one terrorist infiltrated the West Bank settlement of Itamar, southeast of Nablus, late Friday night (March 11th) and stabbed to death Udi (36) and Ruth (35) Fogel, and their children Yoav, 11, Elad, 4, and 3-month-old Hadas.
.
The killings occurred shortly after 10pm [local time] when one or two attackers jumped the fence that surrounds Itamar and broke into the home of Ruth and Udi Fogel. The attackers went from room to room, first stabbing the parents and their 3-month-old baby girl, Hadas. They proceeded to the next room where they killed the two sleeping boys, Elad, 4, and Yoav, 11.
.
Two other boys - Ro'ie, 8 and Yishai, 2 - were sleeping in another room and were not attacked.
.
The family's oldest child, 12- year-old Tamar, was out of the house at the time and alerted neighbors when no one opened the door for her.
.
The IDF continues to search for the terrorists who carried out the murder of the Fogel family.
.
***********************
.
Glenn Beck on Itamar Massacre
Regardless of what you think of Glenn Beck... While the rest of the world’s media has quickly forgotten about the horrific atrocity that occurred in Itamar this past weekend, Glenn Beck did not. This is the closing segment of the Glenn Beck show from Monday evening. Nice work Glenn...
This video posted on YouTube by SassVideo.
.......................
.
Read more at links below:
President Shimon Peres on murder in Itamar
PM Netanyahu on the terrorist attack in Itamar
Response of FM Liberman to terror attack in Itamar
Israel submits complaint to UN on terror attack in Itamar
.
.....................
AubreyJ.........
.
Above info/images taken from the IDF/MFA websites
.
Posted by AubreyJ......... at 3/15/2011 03:32:00 PM