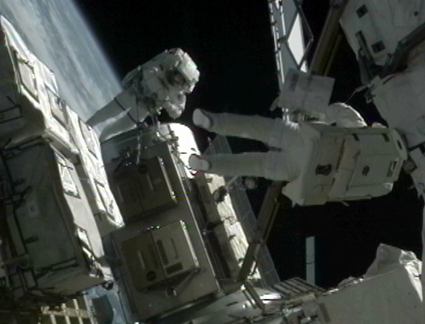 About above image: Mission Specialists Steve Bowen and Alvin Drew work outside the International Space Station during their first spacewalk of STS-133.
Image credit: NASATV
.
If correct... Today’s Spacewalk by Astronauts Bowen and Drew should begin sometime between 9am and 10am CST.

......................................
.
-- Second Spacewalk in Progress --
9:48am CST
.
The second STS-133 spacewalk began at 10:42am EST, when Steve Bowen and Alvin Drew switched their suits to battery power.
.
This is Bowen's seventh spacewalk and Drew's second. It is the 244th by U.S. astronauts and the 155th spacewalk in support of International Space Station assembly and maintenance. Discovery Mission Specialist Nicole Stott is once again inside the station, choreographing the activities and coordinating communications between the spacewalkers and Mission Control in Houston. Station Commander Scott Kelly and shuttle Mission Specialist Mike Barratt are in the cupola operating the station's 58-foot long robotic arm during the spacewalk.
.
Bowen is EV-1, the lead spacewalker, and is wearing a suit with red stripes. His helmet camera displays the number 19. Drew is EV-2, wears an all-white spacesuit, and his helmet camera displays the number 20.
.
Drew will complete the last task related to the failed ammonia pump module the pair moved into a storage location on Monday. He will vent the remaining ammonia from the module into space, using a special tool to protect his spacesuit from any ammonia contamination. Once he's done, he'll remove the tool and place it back in the airlock.
.
Meanwhile, Bowen will ride the station's robotic arm to the Columbus module and retrieve a lightweight adapter plate assembly that was used to attach experiments to the outside of Columbus. Drew will remove insulation from the avionics assembly on the Express Logistics Carrier-4 and gather up three sets of stowage bags from the Crew Equipment Translation Aid (CETA) cart on the left side of the station's truss, or backbone.
.
The crew will move a sunshade away from the lens of a video camera near Express Logistics Carrier-4. The sunshade is partially obscuring the camera's view.
.
Throughout the remainder of the spacewalk the pair will work separately. Bowen will ride the arm to the Dextre robot, where he will install a camera light and pan and tilt assembly and remove unneeded insulation while Drew installs a light on the CETA cart. From there, Drew will move to a radiator beam on the left hand truss segment and install insulation on its valve module fluid line. He also will tighten a loose radiator grapple fixture stowage beam that was installed on STS-131 and might be used to temporarily store handles that would be necessary if a radiator ever needed to be replaced. Next, Drew will head to the Tranquility node to remove insulation covering electrical connectors. Bowen will climb off of the robotic arm and install a lens cover on the arm's elbow joint camera, which will protect the lens from erosion that might be caused by visiting spacecraft thrusters. The rest of the spacewalk will be spent installing similar covers on other cameras.
......................................
. 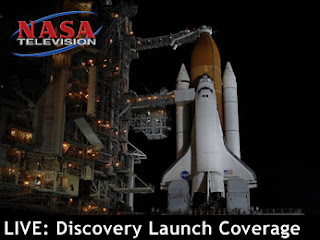