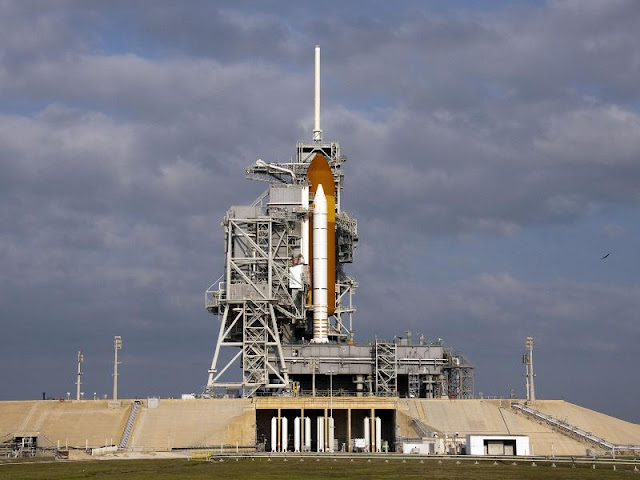 NASA managers have retargeted Space Shuttle Endeavour's launch to no earlier than Monday, May 16th. After a meeting on Friday, they also extended the length of Endeavour's STS-134 mission to the International Space Station from 14 to 16 days. If Endeavour launches on May 16th, liftoff would be at 8:56 a.m. EDT.
.
At 3 p.m. on Monday, May 9th, NASA Space Shuttle Program Launch Integration Manager Mike Moses and Shuttle Launch Director Mike Leinbach will hold a news conference at Kennedy Space Center in Florida to discuss the progress of repairs since Endeavour's launch postponement on April 29th. The news conference will air live on NASA Television and online at www.nasa.gov/ntv.
.
Kennedy technicians are continuing work to resolve an issue in a heater circuit associated with Endeavour's hydraulic system that resulted in the launch postponement. Technicians determined the failure was inside an aft load control assembly, which is a switchbox in the shuttle's aft compartment, and possibly its associated electrical wiring.
.
Although the root cause of the failure in the switchbox has not been found, technicians are replacing hardware that could have caused the problem. The faulty box was changed Wednesday, and a test of nine shuttle systems powered by the new box is under way.
.
This weekend, technicians will install and check out new wiring that bypasses the suspect electrical wiring connecting the switchbox to the heaters. They also will run the heaters for up to 30 minutes to verify they are working properly and complete retesting of the other systems powered by the switchbox.
.
The shuttle has three Auxiliary Power Units (APUs) that provide hydraulic power to steer the vehicle during ascent and entry. The hydrazine fuel lines on each APU have two heater circuits that prevent the fuel from freezing while the shuttle is in space. NASA launch commit criteria and flight rules require all APUs and heater circuits to be operational for launch. On Endeavour's first launch attempt, one of two heaters for APU-1's fuel line did not work. Engineers confirmed the circuit in the original switchbox that directed power to the heaters was shorted out.
.
Launch attempts are available through May 26th. May 21st is the only day a launch is not an option because it would lead to a May 23rd docking with the space station. May 23rd is when three of the space station's Expedition 27 crew members undock and return home in their Soyuz spacecraft. Managers reviewed the STS-134 mission timeline and determined the Endeavour crew can accomplish all objectives even with the departure of the three station crew members.
Above Info/Image taken from the NASA.gov website
....................
.
POST UPDATE:
LOOKS LIKE A GO!
* Endeavour's Launch Now Set for May 16th *
Monday, May 09, 2011
.
NASA managers have set the liftoff of Space Shuttle Endeavour for 7:56am CDT on Monday, May 16th. Space Shuttle Program Launch Integration Manager Mike Moses and Shuttle Launch Director Mike Leinbach announced the date at a news briefing Monday from NASA's Kennedy Space Center in Florida.
All above Info/Images taken from the NASA.gov website
..............
Keep up with the
Latest News and Updates
On Endeavour’s Launch/Mission
at NASA.gov
................
AubreyJ.........
.
Posted by AubreyJ......... at 5/07/2011 02:29:00 PM