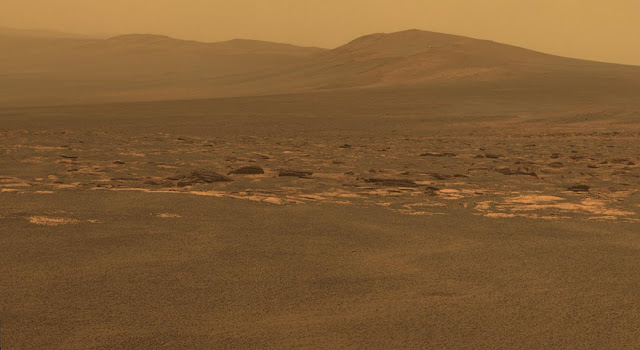 -- At Last --
About above image: A portion of the west rim of Endeavour crater sweeps southward in this color view from NASA's Mars Exploration Rover . This crater -- with a diameter of about 24 miles (22 kilometers) -- is more than 25 times wider than any that has previously approached during 90 months on Mars. Endeavour crater has been the rover team's destination for Opportunity since the rover finished exploring crater in August 2008. Endeavour offers access to older geological deposits than any has seen before.
.
This view combines exposures taken by 's panoramic camera on the 2,678th Martian day, or sol, of the rover's work on Mars (Aug. 6, 2011) before driving on that sol. The subsequent Sol 2678 drive covered 246 feet (75.26 meters), more than half of the remaining distance to the rim of the crater. Opportunity arrived at the rim during its next drive, on Sol 2681 (Aug. 9, 2011).
.
The closest of the distant ridges visible along the Endeavour rim is informally named Solander Point, an area that may investigate in the future. The rover's first destination on the rim, called Spirit Point in tribute to 's now-inactive twin, is to the left (north) of this scene.
.
The lighter-toned rocks closer to the rover in this view are similar to the rocks has driven over for most of the mission. However, the darker-toned and rougher rocks just beyond that might be a different type for to investigate.
.
The ground in the foreground is covered with iron-rich spherules, nicknamed "blueberries," which has observed frequently since the first days after landing. They are about 0.2 inch (5 millimeters) or more in diameter.
.
This view combines images taken through three different filters, admitting light with wavelengths centered at 753 nanometers (near infrared), 535 nanometers (green) and 432 nanometers (violet). This natural color is the rover team's best estimate of what the scene would look like if humans were there and able to see it. Seams have been eliminated from the sky portion of the mosaic to better simulate the vista a person standing on Mars would see. .
Image Credit: NASA/JPL-Caltech/Cornell/ASU
.
.....................................................
.
Dwayne C. Brown
Headquarters, 202-358-1726
dwayne.c.brown@nasa.gov
.
Priscilla Vega/Guy Webster
Jet Propulsion Laboratory, Pasadena, 818-354-1357/-6278 priscilla.r.vega@jpl.nasa.gov/guy.webster@jpl.nasa.gov
.
Wednesday, August 10, 2011
RELEASE: 11-265
.
NASA Mars Rover Arrives
At New Site On Martian Surface
.
WASHINGTON -- After a journey of almost three years, NASA's Mars Exploration Rover has reached the Red Planet's Endeavour crater to study rocks never seen before.
.
On Aug. 9, the golf cart-sized rover relayed its arrival at a location named Spirit Point on the crater's rim. Opportunity drove approximately 13 miles (21 kilometers) after climbing out of the crater.
.
"NASA is continuing to write remarkable chapters in our nation's story of exploration with discoveries on Mars and trips to an array of challenging new destinations," NASA Administrator Charles Bolden said. "'s findings and data from the upcoming Mars Science Laboratory will play a key role in making possible future human missions to Mars and other places where humans have not yet been."
.
Endeavour crater, which is more than 25 times wider than crater, is 14 miles (22 kilometers) in diameter. At Endeavour, scientists expect to see much older rocks and terrains than those examined by during its first seven years on Mars. Endeavour became a tantalizing destination after NASA's Mars Reconnaissance Orbiter detected clay minerals that may have formed in an early warmer and wetter period.
.
"We're soon going to get the opportunity to sample a rock type the rovers haven't seen yet," said Matthew Golombek, Mars Exploration Rover science team member, at NASA's Jet Propulsion Laboratory (JPL) in Pasadena, Calif. "Clay minerals form in wet conditions so we may learn about a potentially habitable environment that appears to have been very different from those responsible for the rocks comprising the plains."
.
The name Spirit Point informally commemorates 's twin rover, which stopped communicating in March 2010. Spirit's mission officially concluded in May.
.
"Our arrival at this destination is a reminder that these rovers have continued far beyond the original three-month mission," said John Callas, Mars Exploration Rover project manager at JPL.
.
NASA's Mars Reconnaissance Orbiter, which launched Aug. 12, 2005, is searching for evidence that water persisted on the Martian surface for a long period of time. Other Mars missions have shown water flowed across the surface in the planet's history, but scientists have not determined if water remained long enough to provide a habitat for life.
.
NASA launched the Mars rovers Spirit and in the summer of 2003. Both completed their three-month prime missions in April 2004 and continued years of extended operations. They made important discoveries about wet environments on ancient Mars that may have been favorable for supporting microbial life.
.
JPL manages the Mars Exploration Rover Project for NASA's Science Mission Directorate in . Imagery taken after arrived at Endeavour will be released on NASA's website and NASA Television as soon as available on Wednesday.
.
For more information about the rover and a color image as it approached the crater, visit: HERE
.
***********************************
.
Spirit's Snapshots of Mars
These views of Mars are just a small sampling from the 124,000 images returned by the Spirit rover...
.
...........................
Said it more than once over the last so many years...
I LOVE THIS STUFF!
.
At one time, I thought I’d be around to see the first man actually land on the surface of Mars. But sadly, looks like Congress and our President have put that thought completely out of reach now. I mean, they have REALLY screwed up our Manned Space Program.
NO VISION!!!
.
AubreyJ.........
...