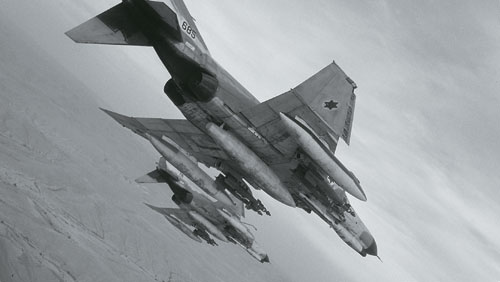 IAF file photo
Senior Israeli Southern Command Officer says "ongoing attacks - by rockets and along the border - are cumulatively more than enough to justify immediate action” - UN Nuclear Inspectors say no progress was made in latest Inspection visit, with access blocked to key site - Iranian regime threatens pre-emptive strikes
Wednesday, February 22, 2012
…
* JPost.com had the following report posted on their website early Sunday afternoon and it starts off like this… Calls are mounting within the IDF’s Southern Command to launch a large-scale offensive against Hamas and Islamic Jihad in the Gaza Strip in the face of continued rocket attacks over the weekend…
Read this report in full at link below…
IDF factions push for offensive in Gaza
.
* CBS News had this report posted on their website late Monday afternoon and it starts off like this… President Obama's national security adviser has concluded three days of talks with Israeli leaders in Jerusalem amid an escalating focus on Iran's nuclear intentions. The visit comes in advance of a March 5 meeting at the White House between Mr. Obama and Israeli Prime Minister Benjamin Netanyahu… CBS Radio News correspondent Robert Berger reported from Jerusalem that National Security Adviser Tom Donilon brought what media reports described as a clear message to Israeli leaders: Don't attack Iran… But the country isn't making any promises, according to Israeli spokesman Mark Regev… "Israel cannot tolerate a nuclear-armed Iran," Regev said…
Read the full report at link below…
Israel makes no promises after Obama envoy visit
.
. * The Guardian had this report late Tuesday evening and it starts off like this… The UN nuclear agency has declared its latest inspection visit to Iran a failure, with the regime blocking access to a key site suspected of hosting covert nuclear weapon research and no agreement reached on how to resolve other unanswered questions… The statement from the International Atomic Energy Agency was issued shortly after an Iranian general warned of a pre-emptive strike against any nation that threatens Iran… "We engaged in a constructive spirit but no agreement was reached," the statement quoted IAEA chief Yukiya Amano as saying… The communique said that Iran did not grant requests by the IAEA mission to visit Parchin, a military site thought to be used for explosives testing related to triggering a nuclear weapon. Amano called this decision "disappointing". No agreement was reached on how to begin "clarification of unresolved issues in connection with Iran's nuclear programme, particularly those relating to possible military dimensions", the statement said…
Read the rest at link below…
Iran nuclear talks a failure, says IAEA
.
* JPost.com had the following report posted up on their website this early Wednesday morning and it goes in part like this. …The outcome seems likely to add to already soaring tension between Iran and Western powers, which have ratcheted up sanctions on the major oil producer in recent months… …Earlier, Iran's envoy to the IAEA, Ali Asghar Soltanieh, told the country's ISNA news agency that Tehran expected to hold more talks with the UN agency, whose task it is to prevent the spread of nuclear weapons in the world… But Amano's spokeswoman, Gill Tudor, made clear no further meetings were planned…
Read this report in full at link below…
IAEA: Tehran talks failed to secure agreement
.
********************************.

Herman Nackaerts, the deputy director general of the International Atomic Energy Agency, gives a statement upon his return from talks with Iranian officials in Tehran. He confirms the agency was not granted access to a site thought to be relevant for its investigations, and that no agreement was reached on how to resolve other unanswered questions regarding suspected nuclear activities in Iran.

…………………………………………..
.
Following Press Release 2012/05 by:
International Atomic Energy Agency  (IAEA)
.
IAEA Expert Team Returns from Iran
February 22, 2012
A senior IAEA expert team is returning from Iran after two days of discussions with Iranian officials held on 20 and 21 February 2012. The meeting followed previous discussions held on 29 to 31 January 2012.
.
During both the first and second round of discussions, the Agency team requested access to the military site at Parchin. Iran did not grant permission for this visit to take place.
.
Intensive efforts were made to reach agreement on a document facilitating the clarification of unresolved issues in connection with Iran's nuclear programme, particularly those relating to possible military dimensions. Unfortunately, agreement was not reached on this document.
.
"It is disappointing that Iran did not accept our request to visit Parchin during the first or second meetings," IAEA Director General Yukiya Amano said. "We engaged in a constructive spirit, but no agreement was reached."
………….…...………..
.
‘END GAME’ REACHED!
One can make the leap in belief that the Israeli ‘End Game’ has finally been reached. Especially after this latest and most likely last IAEA report.
.
If you have noticed of late… the Dems, all those in the MSM… and President Obama have ALL been telling us that sanctions on Iran have begun to work, that they have actually started to show fruit if I may. But, my friends… it just isn’t so!
.
ALL the sanctions imposed upon Iran over the last so many years… and of late too… have absolutely failed to do a damn thing in stopping Iran on their march to building a Nuclear Weapon.
.
Bottom line… Iran’s actions show us all we need to know about just how well all these sanctions have been working. They haven’t!
.
Sadly this leads me to only one conclusion over all this mess.
.
‘END GAME’
REACHED!
.
AubreyJ………
.
Posted by AubreyJ......... at 2/22/2012 05:37:00 PM