This post on top for the rest of the Day -- Scroll below for updates on Attorney General Erick Holder in Contempt of Congress
Supreme Court, In a Nutshell, Upholds
Health-Care Reform Law
Chief Justice JOHN G. ROBERTS, JR Was Swing Vote
** Obamacare Still Stands **
Welcome fellow Americans to the Biggest Tax Increase in U.S. History
. 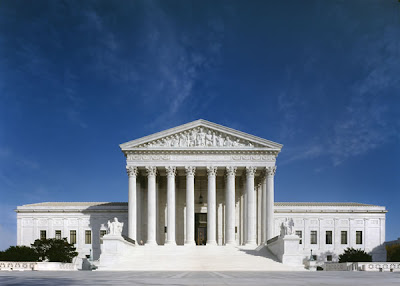 .Supreme Court Building - (Franz Jantzen)
.
The Supreme Court upheld the Health Care Law today giving President Obama a MAJOR VICTOY… for now.
.
In a Nutshell… the justices ruled the individual mandate, the part of the Law that requires most Americans to buy health insurance or pay a fine, is constitutional AS A TAX. (But remember… this bill was run down our throats with the premise… “This is NOT a TAX! That it wouldn’t coast you anymore.” Remember that one my friends, for you will be hearing a LOT more about just this for a LONG time forward.)
.
One big surprise this morning was that Chief Justice Roberts is the one to end up providing the key vote… NOT Justice Kennedy!
.
As has been said for months and years now… You NEVER can read into what these men and women on the Supreme Court will rule, on any given case! How TRUE… How True.
.
Again… Obamacare Still Stands BUT as the Biggest Tax Increase on the Middle-Class Ever!
Meaning for one… If you don’t buy Health Insurance, YOU WILL have the IRS on your case!
.
…………………………
.
Supreme Court Members
.
Chief Justice of the United States
JOHN G. ROBERTS, JR-
.
Associate Justices
ANTONIN SCALIA-
ANTHONY M. KENNEDY-
CLARENCE THOMAS-
RUTH BADER GINSBURG-
STEPHEN G. BREYER-
SAMUEL A. ALITO, JR-
SONIA SOTOMAYOR-
ELENA KAGAN-.


……………………………
My Take:
.
Thursday, June 28, 2012
4:15pm CDT
.
This argument, by both Parties, that you can keep your existing HealthCare Plan if you wish is wonderful… well, it is not. Insurance is already being run up… making many to wonder.
.
Now I do not know about you guys but I have noticed that over the last year or so even the BEST of Insurance Policies have changed so much and stopped paying nearly as much as they use to on their coverage, putting a strong squeeze on those that have surgery and expensive test. And yes… my wife and I are two of those in that boat.
.
In many ways I’m glad the Supreme Court ruled that the individual mandate, the part of the Law that requires most Americans to buy health insurance or pay a fine, is constitutional but AS A TAX, instead of throwing it out.
.
This takes the Dems argument that it is all politics on the Supreme Court’s part right out of there, them dang Republicans, and now puts it ALL right back on them instead. Yes, this will become the Largest Tax Increase in U.S. History! And it will surely fall hard on many in the middle class.
.
How soon so many forget that this bill was ran down our throats with the premise… “This is NOT a TAX… that it would NOT cost you ONE CENT MORE!” That’s President Obama’s words, and nearly EVERY Democrat in Congress… not mine. (And they said Bush lied!)
.
Remember that one my friends, for you will be hearing a LOT more about just that for a LONG time forward. For the way I see it… the Sleeping Giant has been reawakened just like in 2010, but even more so -- if that is even possible.
.
Now don’t get me wrong… we SOOO need Major Change in our Healthcare Laws and fast. But this 2,700 some odd page monstrosity that even the best of Lawyers have a hard time wrapping their heads around must GO! This time around though, let’s PLEASE get it right and on bipartisan bases.
.
There really are parts of Obamacare that are popular and need to stay… but so much of it that needs to go. So to get it done we’ll need this November to get the Dems and Obama out of charge of the White House and Senate and just get on with it.
.
No… that DOESN’T mean running it down the throats of our Democrat friends either. It HAS to be done with both sides on board and hard work. Only then will the American peoples start having faith in their government again and finally get a new Healthcare Bill that we ALL can be proud of. Obama promised us just that… along with all that Hope and Change. But look at all the mess we have now instead.
.
With all that said… and everything stands as is… sadly, I see the beginning of ALL of us being FORCED, slowly but surely, into going on the NEW Government Health-Care Plan and just forced to suck it up!
.
CHANGE is happening my friends. It’s happening right now, as I type… but in a very BAD WAY!
.
AubreyJ………
Aubrey J. Fawcett
.
ROMNEY2012