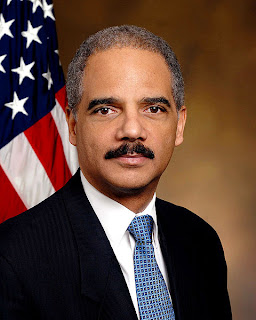 United States Department of Justice Official Portrait
.
President Obama Asserts Executive Privilege
Backing His Embattled Attorney General Erick Holder Over Botched Arms Smuggling Operation Fast and Furious
Today the House voted to hold Attorney General Eric Holder in contempt of Congress with a vote of 255-67 on criminal contempt charges and 258-95 on civil contempt charges
Thursday, June 28, 2012
.
CBS brings us this up to date report at 4:35pm CDT and it starts off like this... The House of Representatives voted to hold Attorney General Eric Holder in contempt of Congress Thursday for failing to provide documents relating to the Fast and Furious gunwalking program… The House took two votes, one on criminal contempt charges, which passed 255-67. The criminal contempt of Congress is likely not to go anywhere as the Justice Department, which Holder heads, is the department responsible for opening a criminal investigation… The second charge, which passed 258-95, was a civil contempt charge, could move to federal court where it could take years to litigate. Though the action puts more pressure on the administration to abide by the subpoenas and provide requested documents… The Democratic Party was split on the action. Seventeen members voted with the Republicans to hold Holder in criminal contempt while just under two dozen voted to hold him in civil contempt. But most, led by the Congressional Black Caucus, walked off the floor to protest the vote, which they called "appalling."…
Read the full report at link below…
Housecharges Holder with contempt of Congress
.
………………
More to come and that’s a certain!
AubreyJ………
ROMNEY2012
.
Posted by AubreyJ......... at 6/28/2012 05:12:00 PM