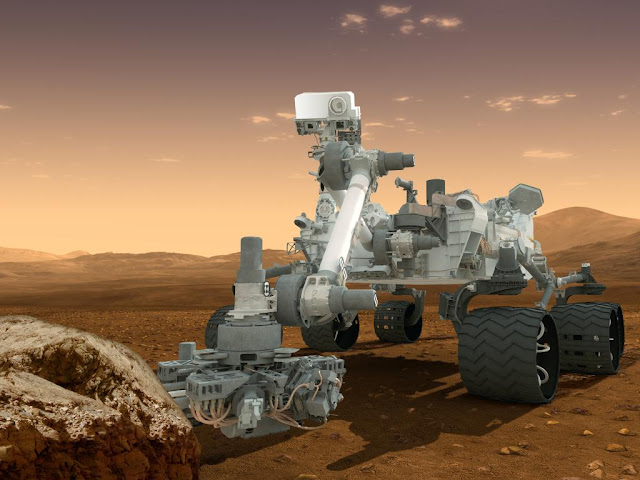 .Image credit: NASA/JPL-Caltech
.
Scroll below for the latest UPDATES…
--While we wait, here are some fun facts from NASA--
Curiosity - Robot Geologist and Chemist in One!
.
The above artist's concept features NASA's Mars Science Laboratory Curiosity rover, a mobile robot for investigating Mars' past or present ability to sustain microbial life.
.
Curiosity will land near the Martian equator about 10:31pm, Aug. 5th PDT (12:31am August 6th EDT).
.
In this picture above, the rover examines a rock on Mars with a set of tools at the end of the rover's arm, which extends about 7 feet (2 meters). Two instruments on the arm can study rocks up close. A drill can collect sample material from inside of rocks and a scoop can pick up samples of soil. The arm can sieve the samples and deliver fine powder to instruments inside the rover for thorough analysis.
.
The mast, or rover's "head," rises to about 6.9 feet (2.1 meters) above ground level, about as tall as a basketball player. This mast supports two remote-sensing science instruments: the Mast Camera, or "eyes," for stereo color viewing of surrounding terrain and material collected by the arm; and, the Chemistry and Camera instrument, which uses a laser to vaporize a speck of material on rocks up to about 23 feet (7 meters) away and determines what elements the rocks are made of.
[Now that’s some really cool stuff!]
.
NASA's Jet Propulsion Laboratory, a division of the California Institute of Technology, Pasadena, manages the Mars Science Laboratory Project for the NASA Science Mission Directorate, Washington

Curiosity Closes in on its New 'Home'
.
Saturday, August 4th, 2012
6:20pm CDT
.
With Mars looming ever larger in front of it, NASA's Mars Science Laboratory spacecraft and its Curiosity rover are in the final stages of preparing for entry, descent and landing on the Red Planet at 10:31pm PDT Aug. 5th, (1:31am EDT Aug. 6th). Curiosity remains in good health with all systems operating as expected. Today, the flight team uplinked and confirmed commands to make minor corrections to the spacecraft's navigation reference point parameters. This afternoon, as part of the onboard sequence of autonomous activities leading to the landing, catalyst bed heaters are being turned on to prepare the eight Mars Lander Engines that are part of MSL's descent propulsion system. As of 2:25pm PDT (5:25pm EDT), MSL was approximately 261,000 miles (420,039 kilometers) from Mars, closing in at a little more than 8,000 mph (about 3,600 meters per second).
…..
UPDATES:
Sunday, August 5th
.
Earlier afternoon…
Mars Science Laboratory Mission Status Report
.
PASADENA, Calif. -- NASA's Mars Science Laboratory spacecraft is healthy and right on course for a landing in several hours that will be one of the most difficult feats of robotic exploration ever attempted.
.
Emotions are strong in the control room at NASA's Jet Propulsion Laboratory, Pasadena, Calif., as the hours and miles race toward touchdown of the car-size Curiosity at about 10:31 p.m. PDT tonight (about 1:31 a.m. Aug. 6, EDT).
.
"Excitement is building while the team is diligently monitoring the spacecraft," said Mission Manager Brian Portock of JPL. "It's natural to get anxious before a big event, but we believe we are very well prepared."
.
Descent from the top of Mars' atmosphere to the surface will employ bold techniques enabling use of a smaller target area and heavier landed payload than were possible for any previous Mars mission. These innovations, if successful, will place a well-equipped mobile laboratory into a locale especially well-suited for this mission of discovery.  The same innovations advance NASA toward capabilities needed for human missions to Mars.
.
Controllers decided Sunday morning to forgo the sixth and last opportunity on the mission calendar for a course-correction maneuver.  The spacecraft is headed for its target entry point at the top of Mars' atmosphere precisely enough without that maneuver.
.
Later today, mission controllers will choose whether or not to use a last opportunity for updating onboard information the spacecraft will use during its autonomous control of the entry, descent and landing. Parameters on a motion tracker were adjusted Saturday for fine-tuning determination of the spacecraft's orientation during the descent.
.
At the critical moment of Curiosity's touchdown, controllers and the rest of the world will be relying on NASA's Mars Odyssey orbiter to provide immediate confirmation of a successful landing. Odyssey will turn to point in the right direction beforehand to listen to Curiosity during the landing. If for any reason that turn maneuver does not work, a successful landing cannot be confirmed until more than two hours later.
.
The landing will end a 36-week flight from Earth and begin at two-year prime mission on Mars. Researchers will use Curiosity's 10 science instruments to investigate whether Martian environmental conditions have ever been favorable for microbial life.
.
Written by Guy Webster –
Jet Propulsion Laboratory, Pasadena, Calif 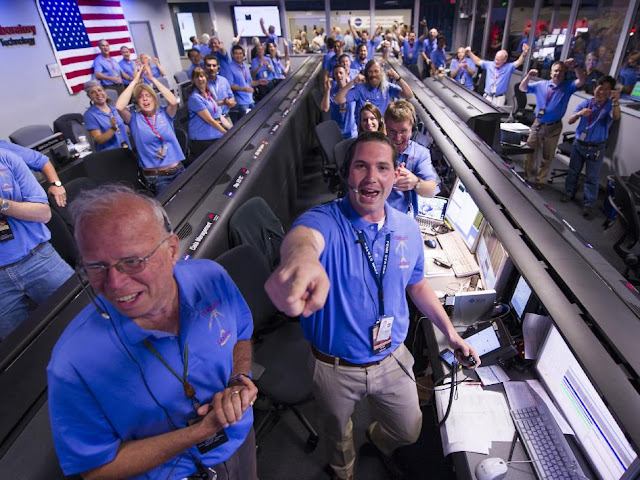 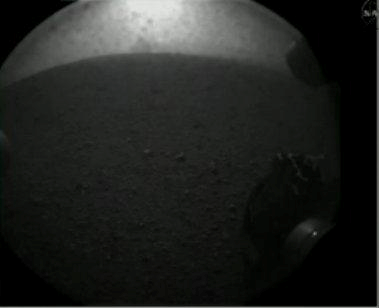 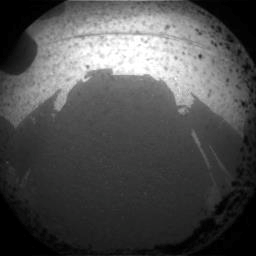 …………………………
* Keep up with the Latest Mission Info…
From NASA HERE
From NASA JPL HERE
(LOTS of videos, images, info and more at JPL link)
......................
.
Curiosity Landing Coverage
.
Again… confirmation of the landing of the Mars Science Laboratory's Curiosity rover on the Red Planet is anticipated at about 1:31am EDT/12:31am central, Monday, Aug. 6th. You can follow the coverage of landing milestones this weekend on NASA TV, which is available online at http://www.nasa.gov/ntv, or follow Curiosity’s entry and landing on the Web at http://www.nasa.gov/msl and on social media at http://twitter.com/marscuriosity or http://www.facebook.com/MarsCuriosity.
…….
The NASA TV broadcast schedule is:

(All times are EDT if I’m correct but you might check in an hour earlier in cased I missed it. OR… just watch the reruns when you get a chance… lol)
.
Saturday, Aug. 4th
9:30am - Prelanding Update and Entry, Descent and Landing (EDL) Overview News Briefing
.
Sunday, Aug. 5th
9:30am - Final Prelanding Update News Briefing
.
3:00pm - NASA Science News Briefing
8:30pm to about 11:00pm - Landing Commentary No. 1
No earlier than 11:15pm - Post-landing News Briefing
.
Monday, Aug. 6th
12:30am to 1:30am - Landing Commentary No. 2
9:00am - Landing Recap News Briefing
.
***************
.
Fingers crossed for a successful Mars landing!!! And I cannot wait for the first images to be sent back to earth, from mars, by this wonderful piece of machinery that has been made possible by pure American genius. (The first Mars pictures expected from Curiosity will be reduced-resolution fisheye black-and-white images received either in the first few minutes after touchdown or more than two hours later. Higher resolution and color images from other cameras could come later in the first week. Plans call for Curiosity to deploy a directional antenna on the first day after landing and raise the camera mast on the 2nd day.)
.
Shooting for the GOLD, NASA!
Make it so…
.
AubreyJ………
ROMNEY2012
.
All above info compiled from the NASA.gov website
.
Posted by AubreyJ......... at 8/04/2012 12:00:00 PM