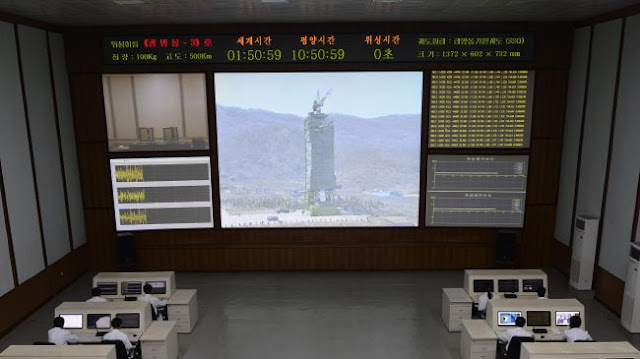 North Korea technicians watch live images of the rocket Unah-3 at the satellite control room of the space center on the outskirts of Pyongyang on April 11, 2012.
Read more at Press TV
.
North Korea is well along in its preparations to launch its Unha-3 long-range missile into space and it could happen as early as this evening, stateside.
.
North Korea says it is only launching a weather satellite… though most believe the launch is actually a disguised Ballistic Missile test… in which the North Koreans will be testing their capabilities to launch future missiles that will be able to carry nuclear warheads that would be able to hit the United States.
.
If that wasn’t enough… South Korean security sources are now saying that after reviewing new satellite imagery… it is now looking like North Korea is also preparing for another nuclear test sometime shortly after the rocket launch.
.
………………………………………….
.
POST UPDATE:
Thursday evening April 12th
6:20pm CDT
.
South Korean Media Is Reporting That North Korea Has Launched Rocket. But… Fox news reports launch may have actually failed... making it off the launch pad OK but having problems later-on in the flight.
…
** UPDATE **
7:00pm CDT
.
It’s NOW Official:
North Korea’s Rocket Launch Failed!
.
Yes… I can now report that North Korea’s Rocket Launch was a FAILURE and NEVER MADE IT out of the Earth’s atmosphere or into space.
.
For the record… it was launched from its Sohae Satellite Launching Station at about 7:39am Friday morning, North Korea’s time… said South Korean Defense Ministry spokesman Kim Min Seok during a televised press briefing in Seoul.
.
Fox news is now reporting that according to their sources, the rocket broke up somewhere between 90 seconds and two minutes into flight. That would mean that it never made it past the first stage of the three stage rocket which would be a MAJOR failure on their part.
...
Update:
Late Friday morning…
11:30am CDT
.
There’s really nothing more to report about all of this, so I won’t. But for now… we all sit and wait to see if the North Korean’s go ahead and actually test another nuclear device sometime in the next few weeks.
.
Being they are already on a roll… They might as well go ahead and Double Down on Stupid!
.
AubreyJ………
.
Posted by AubreyJ......... at 4/11/2012 05:04:00 PM