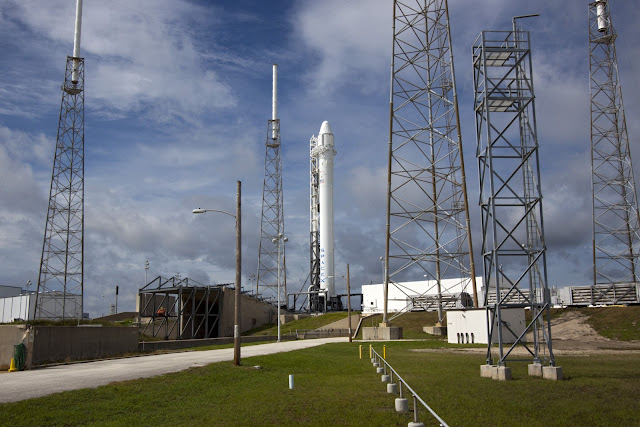 About above image: SpaceX recently performed a demonstration roll to the launch pad of its Falcon 9 rocket and Dragon capsule. Targeted Launch Time is set for 7:35pm CDT, this Sunday, my Birthday, October 7th and will launch from Cape Canaveral, Florida.
Image by NASA/Jim Grossmann
…
Forecast Calls for 60 Percent Chance of Acceptable Conditions
Fri, 05 Oct 2012 - 10:30am CDT
.
SpaceX is putting the finishing touches on its Dragon capsule and Falcon 9 rocket as launch day nears for the SpaceX CRS-1 cargo flight to the International Space Station. Weather forecasters are eyeing the possibility of thick clouds and rain as Sunday's launch time approaches. Liftoff is scheduled for 7:35pm CDT with an instantaneous launch window. The Dragon will carry about 1,000 pounds of experiment equipment and crew supplies to the orbiting laboratory during the first operational cargo mission for the company's flagship launcher and spacecraft.
…
SpaceX Managers Gave the “Go” for Sunday Launch
Fri, 05 Oct 2012 - 5:36pm CDT
.
SpaceX managers held a Launch Readiness Review Friday afternoon and gave a “go” to proceed toward launch of the SpaceX Commercial Resupply Services-1 (CRS-1) mission on Sunday.
.
On Saturday, NASA TV will air an International Space Station Science Briefing at 3pm EDT and the SpaceX CRS-1 Prelaunch News Conference at 6pm on NASA Television and on the Web at www.nasa.gov/ntv.
.
The weather forecast remains 60 percent favorable conditions for launch, Sunday.
……………………
Much more to come in a new post on Launch day… so check back!
AubreyJ………
Romney/Ryan2012
.
Posted by AubreyJ......... at 10/05/2012 06:08:00 PM