Statement by Secretary Condoleezza Rice
Joint Statement With Republic of France Foreign Minister Bernard Kouchner
Washington, DC
Friday, September 21, 2007
The United States and France condemn in the strongest possible terms the brutal murder of Antoine Ghanem. The two countries reaffirm that it is crucial that the Presidential elections in Lebanon be held according to the Lebanese Constitutional schedules and norms. 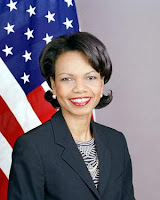 The fact that the international community, through a unanimous Security Council Resolution 1757, instituted the international tribunal following the murder of Prime Minister Hariri, demonstrated its determination not to let such crimes go unpunished.

What is at stake today is the will of the murderers to disrupt the constitutional life of Lebanon, to deprive the Lebanese people and communities of their political rights in the framework of a united, sovereign, and democratic Lebanon. The U.S. and France, with their partners in the United Nations Security Council, are vigilant in protecting this process and the intra-Lebanese political dialogue. France, as President of the Security Council, is keenly attentive to this. Such a result will mark not only the defeat of the murderers but also the victory of all Lebanese people and communities.
2007/788 - Released Date September 21, 2007 by DoS
Photo: Official Portrait of Secretary Condoleezza Rice
Posted by AubreyJ......... at 9/21/2007 09:00:00 AM