Sunday, September 16, 2007
President Bush will nominate former federal district judge Michael Mukasey on Monday to be the next attorney general, FOX News has confirmed... Earlier, FOX News contributor and Weekly Standard Editor Bill Kristol told FOX News on Sunday that the selection was a done deal...
Read the story in full at FOXNews.com 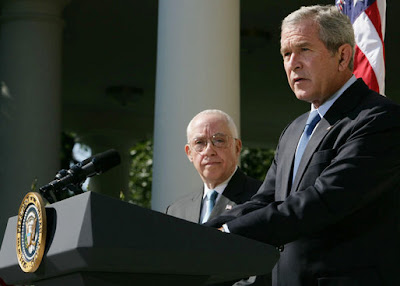 About Photo: President George W. Bush announces his nomination Monday, Sept. 17, 2007, of Judge Michael Mukasey to be Attorney General of the United States in the Rose Garden of the White House.
Read transcript HERE
Has video, audio and more
White House photo by Chris Greenberg