Senator John McCain stops in Indy and blasts the Democrats 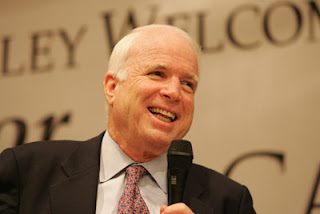 Setting a date to bring U.S. troops home from Iraq would amount to surrender, Sen. John McCain said tonight... The Arizona Republican and candidate for president, in Indianapolis for a private fundraiser, told reporters the proper role for Congress is to fund the war... "The Democrats have lost sight of the fact that presidents don't lose wars, and political parties don't lose wars," McCain said. "Nations lose wars, and when the majority leader of the Senate stands up and says the war is lost, you have to ask, 'Who won? Al-Qaida?' The American people don't want us to fail. And if you can show them a path to success, they'll support it.”......
Read this story in full at IndyStar.com
File Photo Courtesy of MCCAIN.Senate.gov
Posted by AubreyJ......... at 9/21/2007 08:00:00 PM