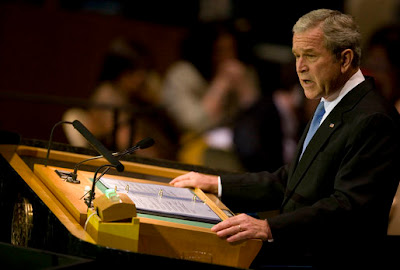 President George W. Bush speaks before the 62nd session of the United Nations General Assembly Tuesday, September 25, 2007, in New York City. Said the President, "With the commitment and courage of this chamber, we can build a world where people are free to speak, assemble, and worship as they wish; a world where children in every nation grow up healthy, get a decent education, and look to the future with hope; a world where opportunity crosses every border... It is the promise that established this body. And with our determination, it can be the future of our world."
Click HERE for transcript, video, audio...
White House photo by Eric Draper