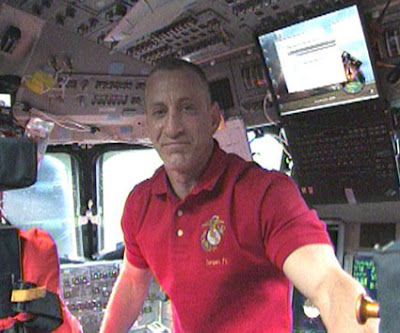 About Image: In this view is Commander Charles Hobaugh on the flight deck of Space Shuttle Atlantis.
...............
.
STORY BEHIND THE IMAGE
Crew Checks Out Shuttle, Prepares for Docking
Tuesday, November 17 2009
.
On Tuesday, Atlantis' astronauts inspected the space shuttle’s thermal protection system, checked out spacesuits and prepared to dock with the International Space Station.
.
Much of the day for STS-129 Commander Charles Hobaugh, Pilot Barry Wilmore and Mission Specialists Leland Melvin, Randy Bresnik, Mike Foreman and Robert Satcher Jr. was devoted to inspection of the shuttle’s heat-resistant tiles and reinforced carbon-carbon surfaces on the wing leading edges and the nose.
.
Hobaugh, Wilmore and Melvin used the shuttle’s arm and its Orbital Boom Sensor System extension to survey Atlantis’ right wing. Bresnik, Foreman and Satcher checked out spacesuits.
.
After the right wing scan Bresnik replaced Hobaugh on the survey team for detailed looks at the nose cap, the left wing and other areas while Foreman and Satcher kept working with the spacesuits.
.
After the inspections were complete and the boom was berthed, Melvin and Bresnik grappled the Express Logistics Carrier 1 in Atlantis’ cargo bay with the shuttle’s robotic arm to get ready for the ELC’s transfer to the station.
.
Toward the end of their day, crew members extended the Orbital Docking System Ring and checked out rendezvous tools. Atlantis is scheduled to dock with the station a little before 12 p.m. EST on Wednesday.
Watch Live on NASA TV - Read latest updates HERE