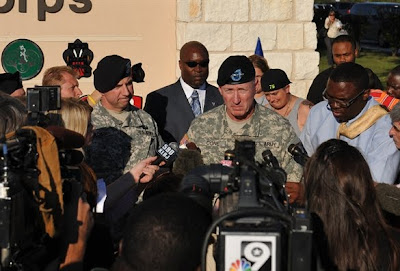 WASHINGTON, Nov. 5, 2009 – U.S. Army Maj. Nidal Malik Hasan is believed to be the lone shooter of some 43 people on Fort Hood, Texas, and he survived being shot by a civilian police officer, the base commander said.
.
In a televised press briefing tonight, Army Lt Gen. Robert Cone corrected earlier reports that said Hasan and the police officer, who shot him several times, were killed. Rather, he said, both are recovering at a nearby hospital.
.
All but two of the victims are soldiers, Cone said.
.
Cone confirmed the identity of Hasan, reportedly a psychiatrist on the base who was scheduled soon to deploy, but would not say more about the suspect. Hasan has been in the company of a Criminal Investigative Division officer since the midday shooting, he said.
.
In answer to a reporter’s question, Cone said of the suspect, “I would say his death is not imminent.” Hasan is not yet talking to investigators.
.
Three other soldiers were initially detained for questioning, but later released. After interviewing more than 100 people at the scene, Cone said, investigators determined there was only one shooter.
.
While investigators haven’t ruled out terrorism in the case, Cone said, the evidence doesn’t suggest it.
.
The shooting began about 1:30 Central Time at Hood’s Soldier Family Readiness Center where Cone said soldiers from multiple units were crowded into the center for a scheduled weekly “make up time” for medical and dental appointments.
.
Casualties were high due to the enclosed location, but would have been much worse were it not for the training and quick reaction of the soldiers, Cone said, adding that he was on the scene quickly after the shooting began.
.
“Suffice it to say…the American soldier did a great job,” he said.
.
From the reports of eyewitnesses, he said, the soldiers – “many of them combat lifesavers” -- reacted instantaneously, ripping off parts of their own clothing to treat the wounded.
.
“I credit the first responders,” he said. “God bless these soldiers and Department of Army civilians. As horrible as this was, it could have been much worse.”
.
Some 600 people attending a college graduation of 138 soldiers in an adjacent building were unharmed because first responders secured the building, he said.
.
The suspect is believed to have used two handguns in the shooting, one a semiautomatic, Cone said. And in responding to a question, “As a matter of practice, we do not carry weapons on Fort Hood,” he said. “This is our home.”
.
However, Cone said, “We will increase our security presence here in the coming days.”
.
The FBI is working the investigation, along with military and other law enforcement, he said. The base was on lockdown until 7 p.m., a base spokesman said.
.
For now, Cone said, Fort Hood officials are focused on caring for the wounded, securing the base, notifying victims’ families and providing grief counseling. A family hotline is available to obtain information at 254-288-7570.
.
Cone, who received a call from President Barack Obama soon after the shooting, said he was grateful for an outpouring of support. “It is truly overwhelming the offers of support we have had from around the nation,” the general said. “Tomorrow at Fort Hood, we return to normalcy, schools will be open.”
.
The Central Texas base is the military’s largest, covering some 340 square miles and is home to 40,000 soldiers. And, according to its Web site, is known as “The Great Place” for its quality of life for soldiers and their families.

* FOXNews.com brings us the following report early this Friday afternoon and it starts off like this... A female civilian police officer [Fort Hood Police Sgt. Kimberly Munley] is being hailed as a hero in the aftermath of a gunman's rampage at Fort Hood - an outbreak of violence that the officer is credited with ending by shooting the alleged gunman four times despite being shot herself...
Read the full report at link below...
Female Police Officer Credited With Stopping Fort Hood Massacre, Hailed a Hero

About this news video: Military officials were starting Friday to piece together what may have pushed an Army psychiatrist trained to help soldiers in distress to turn on his comrades in a shooting rampage that killed 13 people and wounded 30 in Texas. This video is around 3 minutes long.
Read their lengthy AP report at link below...
'Sir, they are opening fire over there!'
This video posted on YouTube by WPRI
.............................................
.
Fort Hood Suspect: 'Allahu Akbar'