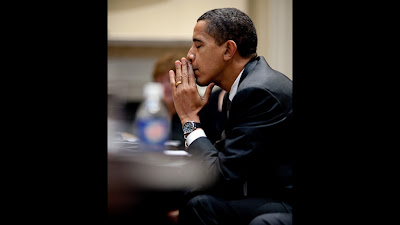 Official White House file photo by Pete Souza
.
Message from the President to the CIA Workforce
.
Earlier this morning, the President sent this message to the CIA workforce in relation to yesterday’s attack in Khost Province, Afghanistan:
.
To the men and women of the CIA:
.
I write to mark a sad occasion in the history of the CIA and our country. Yesterday, seven Americans in Afghanistan gave their lives in service to their country. Michelle and I have their families, friends and colleagues in our thoughts and prayers.
.
These brave Americans were part of a long line of patriots who have made great sacrifices for their fellow citizens, and for our way of life. The United States would not be able to maintain the freedom and security that we cherish without decades of service from the dedicated men and women of the CIA. You have helped us understand the world as it is, and taken great risks to protect our country. You have served in the shadows, and your sacrifices have sometimes been unknown to your fellow citizens, your friends, and even your families.
.
In recent years, the CIA has been tested as never before. Since our country was attacked on September 11, 2001, you have served on the frontlines in directly confronting the dangers of the 21st century. Because of your service, plots have been disrupted, American lives have been saved, and our Allies and partners have been more secure. Your triumphs and even your names may be unknown to your fellow Americans, but your service is deeply appreciated. Indeed, I know firsthand the excellent quality of your work because I rely on it every day.
.
The men and women who gave their lives in Afghanistan did their duty with courage, honor and excellence, and we must draw strength from the example of their sacrifice. They will take their place on the Memorial Wall at Langley alongside so many other heroes who gave their lives on behalf of their country. And they will live on in the hearts of those who loved them, and in the freedom that they gave their lives to defend.
.
May God bless the memory of those we lost, and may God bless the United States of America.
.
President Barack Obama
.
Taken from a White House Press Release - Office of the Press Secretary
..................................................
.
* The Wall Street Journal has this terrible report out of Afghanistan today and it starts off like this... Seven Central Intelligence Agency officers were killed and six more wounded in a suicide bomb attack in Afghanistan, the CIA Director Leon Panetta said Thursday, the largest single-day loss for the spy agency since the Beirut embassy bombing in 1983... The attack Wednesday killed at least eight American civilians at Forward Operating Base Chapman, a U.S. compound in the Afghan province of Khost near the Pakistani border that has been a base of operations for the CIA... "Those who fell yesterday were far from home and close to the enemy, doing the hard work that must be done to protect our country from terrorism," Mr. Panetta said in a message to agency employees. "We owe them our deepest gratitude, and we pledge to them and their families that we will never cease fighting for the cause to which they dedicated their lives -- a safer America."...
Read the full report at link below...
CIA Officers Are Killed in Afghan Attack
.
* Guardian.co.uk reports it this way... The Taliban claimed responsibility for an attack on a US military outpost that killed seven CIA operatives and wounded six others on Wednesday, in a strike that illustrates the insurgents' growing reach and military capability... Former CIA officers said the dead agents were part of a paramilitary unit, likely involved in recruiting and training local Afghans in security roles and carrying out military operations against Taliban and al-Qaida militants along the Pakistan border... The attack took place at a military outpost about a dozen miles from the federally administered tribal areas of Pakistan, a Taliban stronghold...
Read the rest at link below...
Taliban suicide attack kills CIA agents at US outpost in Afghanistan
.
* Telegraph.co.uk has this report late this Thursday afternoon... The suicide bomber who killed seven CIA employees at a remote base in south-eastern Afghanistan was being courted as an informant and had been invited onto the base, according to a report... The bombing, which came as President Barack Obama's surge is gathering pace, represented the biggest loss of life suffered by the US intelligence agency since an attack in Beirut in 1983. The CIA said on Thursday a further six agents had been injured in the attack... On Thursday night it was reported that the bomber had been invited onto the base and had not been searched... A former senior intelligence official told the Associated Press that the man was being courted as an informant and that it was the first time he had been brought inside the camp... The official said a senior and experienced CIA debriefer came from Kabul for the meeting, suggesting that the purpose of the session was to gain intelligence...
Read the full report at link below...
CIA suicide bomber was invited on base, report claims
****************************************
.
CIA Slaughter in Afghanistan
.