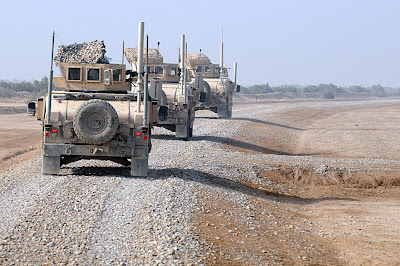 Soldiers from the 1st Armored Division's 501st Military Police Company participate in a convoy live-fire exercise at the Besmaya Range complex near Contingency Operating Station Hammer, Iraq, Jan. 2, 2010.
U.S. Army photo by Sgt. Samantha
.....................
.
Soldiers of the 1st Armored Division's 501st Military Police Company participated in a live-fire training exercise Jan. 2 at the Besmaya Range complex near Contingency Operating Station Hammer.
.
The MPs began arriving in Iraq Dec. 30, and the exercise was part of their mandatory initial training for their unique mission requirements. The range familiarizes soldiers with the positions they will occupy in their trucks during convoy missions.
.
The exercise involved six convoy teams of four trucks each.
.
Although the day was long starting around 2:30 a.m., with a return to post around 7:30 p.m. soldiers found the training valuable.
.
"It was probably the best [range] we've ever been to," said Army Sgt. Josh Locke, a truck commander from Indianapolis.
.
Locke said previous training ranges he's experienced have required each truck to stop during the convoy to load weapon systems. Then, one at a time, the vehicles would drive through, shoot off their rounds, and drive around to clear their weapons. This range ran much smoother and more efficiently, he noted. MPs loaded their weapons at the same time, went through five different lanes, and fired simultaneously at a continuous rate.
.
"It just gives you a really good idea of what your gunners can do when they're out there knocking down targets," he said.
.
The exercise was a culmination of much of the training the MPs received before they deployed, said Army Spc. Robert Brubaker, a gunner from Thermont, Md. The range proved practical, he added, giving team leaders a chance to work with the gunners and drivers to ensure mission success.
.
In addition to live-fire training, the 501st has started the process of taking over for the 1st Cavalry Division's D Troop, Divisional Special Troops Battalion. The transition will include observing and working with D Troop soldiers until the 501st can operate alone when D Troop goes home.
.
Most of the 501st leaders have deployed previously with the unit, so many enlisted soldiers said they feel confident the personal security detail will run smoothly.
.
Army Sgt. Troy Clement, a truck commander from Concord, N.C., said the unit is well prepared and well trained for a variety of missions.
.
"With the leadership we have and the adaptability we have," he said, "we're ready for the handoff."
.
Taken from DoD’s American Forces Press Service News Article that was written by Army Sgt. Samantha Beuterbaugh of the 366th Mobile Public Affairs Detachment serves in the U.S. Division Center public affairs office - Special to American Forces Press Service
Posted by AubreyJ......... at 1/06/2010 09:48:00 AM