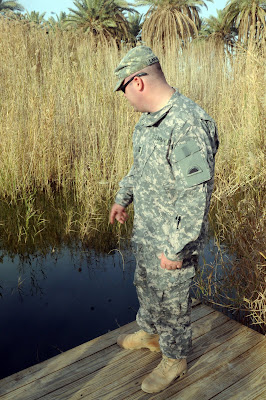 .
AL ASAD AIR BASE, Iraq - In the past 4,000 years the terrain in Iraq has changed drastically, but according to the oral tradition of the Bedouins, one of the resting places along the biblical journey of Abraham from Ur to Canaan is located at Al Asad Air Base, Iraq.
.
The oasis at Al Asad, commonly referred to as Abraham's Oasis or Abraham's Well, would have been critical to Abraham's travels through the desert.
.
Capt. Michael T. Lanigan, the chaplain with Task Force Atlas, 41st Infantry Brigade Combat Team out of Portland, Ore., has studied the Bible and the history of the site.
.
"Abraham's oasis was one of the few stopping points that ... according to the oral tradition of the Bedouins, was where Abraham and his family stopped before going on to Canaan, which is Jerusalem, the promised land, where God had called him," said Lanigan, a Salem, Ore., native.
.
Travel from Ur, now Contingency Operating Location Adder, Iraq, to Al Asad can be accomplished in a matter of hours in present times, but Lanigan said he estimates Abraham and his family would have spent at least 58 days traveling this 700 mile distance on foot.
.
Although there is no proof that Abraham stopped at this particular oasis, Lanigan said it would have made sense for Abraham to have followed a path through this area.
.
"[Abraham] definitely traveled north, instead of going all the way west," he said. "That would be a deadly march because there really is not any fresh water. So he had to have moved along the Euphrates [River]."
.
1st Lt. Amaris A. Cervantes, the staff duty officer in charge with the 36th Special Troops Battalion out of Temple, Texas, visited Abraham's oasis Jan. 4 with Lanigan and a small group of Soldiers.
.
Cervantes said, because the oasis is considered a holy site, the Soldiers were asked to secure their weapons in the truck, away from the sacred place.
.
Her visit to the oasis is one of the special experiences the Army has made possible for her, said Cervantes.
.
"Just being here [in Iraq] has been pretty exciting," she said. "A lot of people pay a lot of money to come do stuff like this, to go [visit] this religious site. I get to do it for fun."
.
Lanigan said he facilitates trips to the oasis on a monthly basis, but smaller groups are easier to accommodate.
.
This experience is a good way to educate service members about the history of the land they are in, as well as give them a much needed break, said Lanigan.
.
"It is something to kind of get their minds off of always rolling out on missions," he said. "[It helps them] realize there is something bigger and more important, significant, in this land than just electronics and warfare."
.
He said the history behind the oasis is what makes it so special.
.
"That is why it is a pretty cool thing, to have some geographical tie to something spiritual," he said.
.
Written by Spc. Lisa A. Cope, 13th Sustainment Command (Expeditionary) - Article/Photo from DVIDS website
Posted by AubreyJ......... at 1/09/2010 09:35:00 AM