Four months ago, any U.S. or Iraqi soldier walking the streets here would have likely sparked a battle, as the city was under the control of al Qaeda, and the streets were lined with improvised explosive devices. 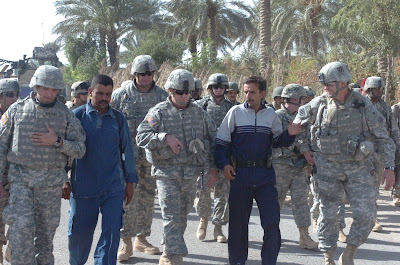 Now, with the concerned local citizens fighting back and helping U.S. soldiers secure the city, the threat of al Qaeda has dropped considerably. An Iraqi army mechanized company also is in place, helping to secure the community.

Iraqis setting aside their secular differences also have helped secure the area. Sunnis and Shiites are working together to fight a greater enemy -- al Qaeda. This hasn't gone unnoticed by U.S. forces.

Klacius spearheaded the "concerned local citizens" program for 1st Battalion, 40th Cavalry Regiment. About four months ago, he began working closely with a local leader named Sheik Ali, who now is the leader of the Hawr Rajab concerned local citizens group. The group has grown to 445 members, U.S. officials said.

Ali, a Sunni, commented to Lynch that working with U.S. forces and the Iraqi army has helped his people return to their homes after they were driven out by al Qaeda more than two months ago. He said he and the rest of the concerned citizens will continue their relationship with the Iraqi and coalition forces to keep al Qaeda out of Hawr Rajab.

"The relationship with you and the IA is very important," Lynch said to Ali. "Whatever you need to help improve the living conditions, we'll try and give it to you."

The outlook for Hawr Rajab is optimistic, as there will be a constant U.S. Army presence and concerned local citizens at Iraqi army checkpoints. "The security is better than it ever has been since I took command 14 months ago," Klacius said.
From news article by DoD’s American Forces Press Service - Photo/article written by Sgt. Jason Stadel, USA - Special to American Forces Press Service
Army Sgt. Jason Stadel is assigned to 2nd Brigade Combat Team.
Posted by AubreyJ......... at 11/09/2007 10:00:00 AM