President Bush's Saturday Radio Address
Saturday, November 10, 2007
.
THE PRESIDENT: Good morning. This weekend, Americans mark two important dates in our Nation's history. On Saturday, we celebrate the 232nd birthday of the United States Marine Corps. And on Sunday, we celebrate Veterans Day -- and give thanks for all those who have worn the uniform of America's Armed Forces.

The Marine Corps was born in a 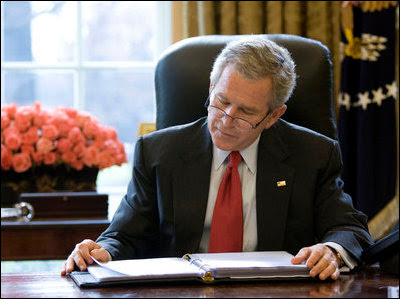 Philadelphia tavern in 1775. Since then, the Marines have become one of the world's premier fighting forces. Their courage and valor in battle have earned them the respect of friend and foe alike. And today, a new generation of Marines is writing another chapter in that proud tradition. Young Marines are serving on the front lines in the war on terror in Iraq, Afghanistan, and around the world. As the Marines celebrate their birthday, we join them in recognizing what their sacrifice and service has meant for our freedom.

America owes a debt of gratitude to all those who have served in our Armed Forces. On Veterans Day, we remember those who have served in previous wars, those who are serving today, and those who did not live to become veterans.
Veterans Day also reminds us of our solemn responsibility to care for those who have fought our Nation's wars. Under my Administration, Federal spending for our veterans has increased by more than two-thirds. We have extended medical treatment to a million additional veterans, including hundreds of thousands returning from Afghanistan and Iraq. And we have expanded grants to help homeless veterans across the country.

These are the generous actions of a grateful Nation -- and to build on them, I nominated a good man to head our Department of Veterans Affairs: Doctor James Peake. Doctor Peake is an Army doctor, a retired lieutenant general, and a combat veteran who was wounded twice in Vietnam, and decorated for his valor. When confirmed by the Senate, Doctor Peake will take on an important task -- continuing my Administration's work to implement the recommendations of the bipartisan Dole-Shalala Commission on Wounded Warriors. These recommendations are vital to ensuring better care for our veterans, and Congress needs to confirm Doctor Peake so he can lead the way in this crucial effort.

Some of the Commission's recommendations require legislative action, such as updating the disability system to fully meet the needs of our wounded warriors. So my Administration has sent Congress a bill that would enact all the legislative steps recommended by the Commission. This is a good bill, our wounded warriors and their families are counting on it, and I urge Democrats and Republicans to come together to pass it as quickly as possible.

Congress can also meet its responsibility to our veterans by passing a clean Veterans Affairs appropriations bill. Unfortunately, Congressional leaders let the fiscal year end without passing this bill they know our veterans need. So I urged Congress to pass this bill by Veterans Day -- and they still have failed to send me this vital legislation. The time to act is running out. There are now just four days left on the legislative calendar before Congress leaves town for their Thanksgiving break. The best way members of Congress can give thanks to our veterans is to send me a clean bill that I can sign into law.

On this Veterans Day, I urge every American to take time to thank one of our Nation's 24 million veterans. They come from different generations and different backgrounds. But they are united by a commitment to honor, duty, and love of country that has kept America free. They continue to strengthen and inspire our Nation. And we will never forget what we owe them.