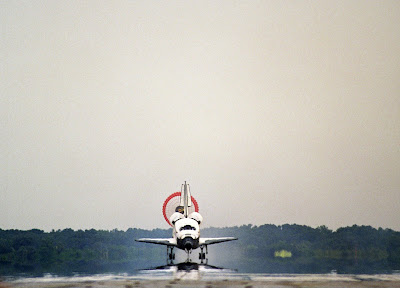 File Image Credit: NASA/Tony Gray and Tim Powers
**************************************
The seven astronauts on board space shuttle Discovery completed final preparations Tuesday for their return home with landing planned for the first of two opportunities to the Kennedy Space Center, Fla., at 1:01 p.m. EST Wednesday.

In preparation for the return home, the crew tested flight control systems and thruster jets, stowed equipment and installed a special reclining seat for Clay Anderson, who is returning after more than five months on board the International Space Station. Later, the crew oversaw an orbit adjust maneuver to optimize landing opportunities with weather forecasts indicating favorable conditions for Wednesday’s landing.

Wednesday morning, Entry Team Flight Director Bryan Lunney and his team will oversee Discovery’s reentry and landing with the deorbit burn set for 11:59 a.m. The 1 minute, 58 second burn will slow Discovery by 148 miles per hour (217 feet per second) for the reentry across the heartland of the United States traveling from the northwest to southeast.

A second landing opportunity also is available about 90 minutes later. Lunney will consider Florida only for Wednesday’s landing attempts with plenty of consumables on board to stay in space through Saturday, if necessary... .
*****************************
Wednesday, 11:52am EST
Discovery given go for BURN and Landing
The BURN that will bring Discovery out of orbit
should start around 12:00pm EST and last for about 1 minute 53 sec....