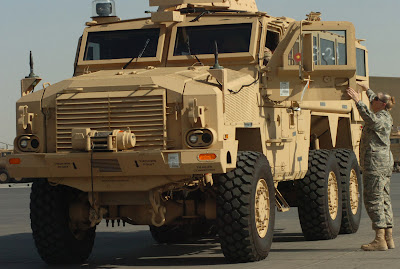 About Photo: The new Mine Resistant Ambush Protected (MRAP) vehicle undergoes initial inspection upon its arrival to Balad Air Base, Oct. 27. The MRAPs Design, including its “V” shaped hull, will provide greater protection from explosions for Soldiers out on combat logistics patrols.
Photo by Spc. Thomas Keeler, 316th Expeditionary Sustainment Command
.
Story below...
.
More Soldiers Issued Safer Vehicles in Iraq
Sunday, November 11, 2007
.
The military’s newest fighting vehicles are now on the ground at LSA Anaconda.

Five new Mine Resistant Ambush Protected (MRAP) vehicles, which arrived at Balad Air Base Oct. 27, will replace the M1114 vehicles the Army currently uses in theater.

Lt. Col. Jeff Meo, 402nd Army Field Support Brigade commander from Army Material Command, says the MRAPs will provide more protection for Soldiers out on combat logistics patrols. “The MRAP is mine protected with a ‘V’ hull, which allows it to ‘push off’ the explosion when it’s hit,” said Meo.

In addition to being up-armored, the interior seating has also been redesigned.
“The MRAP has seats that flex with an explosion, and what that does is absorb a lot of the energy so Soldiers aren’t injured,” he said.

The MRAPs that arrived here were the first Army MRAPs to arrive in theater outside of Baghdad. The vehicles were unloaded from the plane via ERO, or engine running offload, from a Russian cargo jet large enough to carry the vehicles, according to Chief Master Sgt. Adriene Benton, air transportation manager with the 332nd Expeditionary Logistics Readiness Squadron. After refueling, the vehicles are driven from the freight yard to the Retrograde Property Accountability Team yard here.

“The Soldiers will come in as a group, usually at a company level, and we will issue 18 to 30 vehicles at a time,” said Meo. A week of maintenance and driver training is required before Soldiers are ready to take the MRAP on the roads. The training includes a night driving route around LSA Anaconda.

Units issued the MRAPs will leave their old vehicle behind for deprocessing.
The Marine Corps, which runs the MRAP vehicle program, began using the same new vehicles in operations earlier this year. But not all MRAPs are designed to the pecifications. In order to promote competition, the Marine Corps issued contracts to five manufacturers who submitted a design.

“We have seven variances with five different manufacturers, so every time you come out you may see a little different vehicle,” says Meo.

This shipment of five MRAPs to LSA Anaconda is the first of many. Manufacturers are scheduled to deliver 4,600 of the vehicles into theater over the coming weeks and months.

Email ThisBlogThis!Share to TwitterShare to FacebookShare to Pinterest
Labels: On Ground Updates